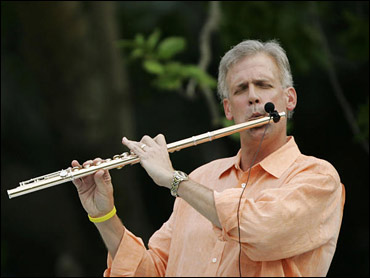 "You all enjoy yourself," said President Bush, who ambled out on the lawn with first lady Laura Bush to greet his guests, including many of his longtime political adversaries.

"Make sure you pick up all the trash after it's over," he joked just before Kermit Ruffins and the Barbecue Swingers struck up a rendition of "When the Saints Go Marching in."

Further evoking New Orleans, Mardi Gras beads were on hand and drivers in top hats ferried some of the estimated 1,500 guests around the White House driveway in horse-drawn carriages.

"I want to thank our chef, Paul Prudhomme - one of the great chefs in America. Thanks for coming, Paul," said President Bush, praising one of New Orleans' best known kitchen maestros.

The lawn was dotted with picnic tables topped in yellow and white checked tablecloths.

The picnic at the GOP-controlled White House comes at a time that Democrats control Congress. Republicans were still in charge at the time of last year's picnic.

Mr. Bush thanked leaders of both chambers for attending, and pointed out that Pelosi was in the crowd. "It means a lot that you've come," said the president, greeting the California Democrat who has been a powerful critic of his administration.

Last year, White House chief of staff Josh Bolten came close to stealing the show along with his band, The Compassionates. They appeared like the Blues Brothers in dark shades, white shirts and ties, ending their set with "Born To Be Wild."

This year, White House spokesman Tony Snow played with his band, called Beats Workin'. Snow's band kept the Louisiana theme going with its version of "Johnny B. Goode." Snow then played a flute solo while walking around the stage in jeans, an orange shirt and sneakers. The Doobie Brothers' hit, "China Grove," was the finale.

And what about the food?

You had to be there to really get the idea, but if you're just curious about the eats at such a lofty event, you're in luck – here's the menu, made public Tuesday by Laura Bush's media office:

MENU FOR THE CONGRESSIONAL PICNIC