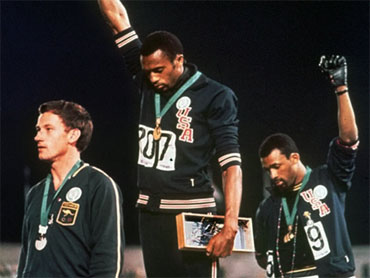 Tommie Smith is selling the gold medal he won at the 1968 Olympics in Mexico City, where his Black Power salute on the podium shocked the sports world.

The former San Jose State runner has put his gold medal for the 200 meters and spikes up for auction at New York-based M.I.T. Memorabilia. The bid starts at $250,000, and the sale is scheduled to close Nov. 4.

The 66-year-old Smith, who now lives in Georgia, declined comment to the San Jose Mercury News.

M.I.T.'s Gary Zimet says Smith is selling the medal for the money but also because he wants to share it with the public.

Some sports memorabilia experts expressed skepticism that the medal would fetch the asking price, the Mercury News reports.

Smith won the 200 in world-record time, then was expelled from the Games along with bronze medalist John Carlos when they bowed their heads during the Star-Spangled Banner and raised their black-gloved fists in protest. The human rights protest eventually earned Smith and Carlos international acclaim.

"He feels that what he did ruined his life in many ways, and he simply doesn't want to put himself in the media spotlight," Zimet told the Mercury News.

In 2007, Smith wrote about the life-changing night in his life story, "Silent Gesture: The Autobiography of Tommie Smith." Appearing on CBS' "The Early Show" that year, he explained why he thought it was important to bring the struggles of black Americans to the world stage, and told of the impact his decision had - and continues to have - on him and his family.

"There's so many things that happened preceding that stand, different social inequalities, and I was asked by those who were responsible in many parts to act responsibly as a young black athlete," Smith said.

The book attempts to clear up many misconceptions. Some thought Smith was part of the militant Black Panthers. But he was actually part a group called The Olympic Project for Human Rights, which had considered a boycott of the Olympics.

What was it he and Carlos were trying to accomplish?

"Getting rid of social inequality (and transforming it) to social equity," Smith responded. "It was not a big difference from what a lot of people were doing at that particular time, in different groups. I did not belong to the Black Panthers or any other group, except The Olympic Project for Human Rights, which started on the campus of San Jose State University," where he was a star athlete.

Smith said he was actually afraid he would be assassinated on the spot.

"Everywhere I went, it seemed that I would be harmed in some way, because of the magnitude of the stand and what we believed in, in terms of human rights."