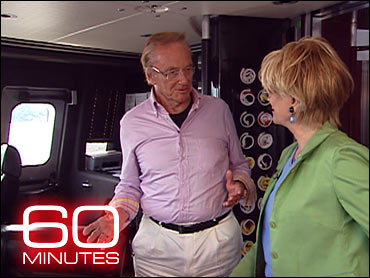 If there were a hall of fame for business tycoons, Tom Perkins would be a first ballot shoo-in. His hands-on engineering skills, combined with his nose for profit, made him the captain of venture capitalism and helped transform Silicon Valley into the money machine of the West. The firm he co-founded, Kleiner Perkins Caufield & Byers, provided start-up capital for companies like AOL, Amazon.com, Netscape, and Google; the list goes on and on.

As correspondent Lesley Stahl first reported last year, he has also been at the center of some corporate boardroom battles at Hewlett-Packard that led to the ouster of one of the most powerful women in business: then-CEO Carly Fiorina. And in 2006 he triggered a confrontation that then brought to light how HP was spying on its own board members and journalists.

By all accounts, Perkins is brilliant, willful and wealthy, lacking in nothing but perhaps a tad of humility.

Tom Perkins has his own personal mega-yacht, "The Maltese Falcon." She's the world's largest privately-owned sailboat, what one magazine called a "big boatload of ego."

"Somebody has to have it, right?" Perkins says, laughing. "Why not me?"

When Stahl first saw the boat, it was moored off the coast of Italy. The Falcon is also a technological breakthrough. The masts stand 192-feet tall, weigh 25 tons each, and are made of carbon fiber.

"The B-1 bomber's made out of carbon fiber," Perkins explains. "Except for the American Air Force, I purchased the most carbon fiber of anybody ever."

Inside, there are two 1,800-horsepower engines, 11,000 square feet of living space, and his crew of 20 includes a gourmet chef and a team of stewards and stewardesses.

Perkins designed the software himself for the computers that make sailing on the Falcon as easy as playing a computer game. You know the wheel a skipper uses to steer a boat? The Falcon's wheel is much smaller than that.

A knob turns the masts, so that the wind blows into the sails at the perfect angle.

Perkins also showed Stahl how to unfurl the boat's 15 sails, a job that would take about 80 deckhands an hour on a traditional sailboat. All it takes on the Falcon is five minutes, and the touch of a screen.

And just like that the sails housed inside hollow, carbon fiber masts began to unfurl-all 26,000 square feet of them. That's over half an acre's worth of sail.

The Maltese Falcon embodies all the grandeur of a 19th century clipper ship. It's also the biggest, fastest, most high-tech sailboat on the high seas, a triumph of science, vision and money.

Asked how much the Falcon cost Perkins, he tells Stahl, "The rule of thumb, Lesley, is that a big yacht costs about a million dollars a meter."

The Maltese Falcon is 88 meters long.

"I'm embarrassed about that," Perkins admits.

Asked why, Perkins says, "There's the homeless and charity and there's lots of things you could do with that money that would improve the world, right?"

"Oh, good point. That you bring up yourself?" Stahl asks.

"Yeah," Perkins says. "So, you know, 'How selfish is this guy?' is, I guess, is the criticism. So the answer's pretty selfish, but I'm just not gonna put a number on it."

Why did it have to be the biggest boat?

"Lesley, I could give you some technical reasons on why it really has got to be big to work right. But I just wanted the biggest boat. Let's admit it," he says.

Whatever it is, he can certainly afford it after making his name and fortune in venture capitalism, which he chronicles in his memoir, "Valley Boy: The Education of Tom Perkins." It is a candid account of his life, his second marriage to romance novelist Danielle Steel, a manslaughter conviction in a boating accident in France, and the deals that made him so wealthy -- starting with the first biotech company, Genentech in San Francisco. He and his partners launched Genentech in 1976 with nothing more than a checkbook and an idea.

"The idea was to trick nature into letting us make something that didn't exist in nature, in particular, human insulin," Perkins explains.

Genentech's success led to new ways of treating everything from diabetes to dwarfism, and to getting rich. Kleiner Perkins' initial investment of $250,000 soared 800-fold, to $200 million.

"That's what venture capitalists are created to do. And you can blame converting the orchards of Silicon Valley into parking lots partly on me and partly on Genentech because we proved that this kind of high risk, high tech venture capital could be an enormous homerun. And everybody wanted to get in on it," he says.

And it took somebody like Perkins, with a background in science, to figure it out. He got an engineering degree from MIT and an MBA from Harvard Business School. And yet, he says only two out of about every ten of his projects resulted in a homerun.

"When you think about putting as much money as you have to into these projects, you'd think you'd get an ulcer or you'd burn out early," Stahl remarks.

"I remember one of our investors said, 'Tom, how do you live with this?' And I said, 'Well, Henry, it's your money,'" Perkins says, laughing.

Perkins is now a partner emeritus at the firm he founded 35 years ago. He seemed about ready to sail off into the sunset when suddenly two years ago, at age 74, his life, and legacy, took a controversial turn. As a member of Hewlett-Packard's board of directors, he played a role in the 2005 sacking of Carly Fiorina, the computer giant's CEO, and a year later the ouster of its chairman of the board, Pattie Dunn. Last October, they both went public on 60 Minutes and, in separate interviews, accused him of engineering their dismissals.

"Is it possible that part of the problem was that you just couldn't accept that there were women in control here? Now, it's a serious question," Stahl asks.

"I realize it's a serious question. And I also realize that I'm gonna be accused of 'He hates women and he fires them or he can't stand them.' Or whatever," Perkins says.

"I just don't think that's true at all. I mean, up until Carly, all those few that I've had to fire have been men," Perkins says.

He denies he engineered Fiorina's firing, but he acknowledges he engaged in a test of wills with board chairman Pattie Dunn. At a crucial meeting, Perkins got so mad at her that he resigned from the board, losing his legendary temper.

"Just slammed your briefcase cover and walked out. I mean, that sounds like a hissy fit of some kind," Stahl points out.

"I was angry," Perkins admits. "There's no question."

"So, you respond, it was like a little mini-tantrum in a way," Stahl asks.

"But it was 90 minutes of very intense debate. I would say I was emotional more than angry although that's maybe the same thing," Perkins says.

After he resigned, by his own admission, he waged a behind-the-scenes campaign to get Dunn removed as chairman of the board. Dunn calls it "a vendetta" to tarnish her reputation.

"If you have enough money and you're willing to spend enough, you can buy and sell somebody's reputation," Dunn told Stahl.

Asked if she was charging that that's what Perkins had done, Dunn said, "That is what he did."

But Perkins says he doesn't hate Dunn. "We disagreed profoundly with the direction she was pulling Hewlett-Packard in," he says.

"You told someone I know, 'I can't stand to breathe the same air she breathes.' You know? And that sounds like you really hate her," Stahl remarks.

When Perkins resigned from the HP board, he ended a long association with the company.

Asked if he misses being on the board, Perkins says, "Yes, I miss being on the HP board. Maybe I made a mistake in resigning as I did."

And he says he regrets it.

He has moved on, though. Today, he's a member of the board of Rupert Murdoch's News Corp., and there are few pleasures that money can buy that he denies himself, or that he doesn't like to show off.

"Let's go through the Tom Perkins litany. You used to own the world's most expensive sports car collection," Stahl says.

"The best. Maybe the most expensive," he says.

"Okay. You currently own a Bentley, a $450,000 Porsche Carrera GT, an Aston Martin, the Maltese Falcon, and a second yacht. Who needs two yachts? Well, we won't go into that. You own a 900-year-old, moated estate in England," Stahl says. "And I'm only telling what we know about. So you do like to show off?"

"Analyze that for us. Why do you have to have the biggest and the first, and…what is that?" Stahl asks.

"You know, I'm no psychiatrist. But it probably comes from my childhood and the attitude of my parents," Perkins says.

An only child, Perkins grew up during the Depression, which he says devastated his father, and distorted his mother's priorities. "My mother wanted things in life that my father couldn't provide -- that were bought by money," Perkins explains. "The fact that we didn't have any money was very, very evident always in my life."

"Because she talked about it all the time. She made it clear," Stahl remarks.

"She talked about it all the time," Perkins says,

And so he cares about money and he likes to spend it. His latest project is his very own sports submarine, which he'll park on the forward deck of the Maltese Falcon. If you got it, flaunt it -- and poke fun at yourself, as he does when he dresses up his yacht with flags and pennants, each of which -- in sailor-speak -- represents a letter of the alphabet.

"What does it say?" Stahl asks.

"Yeah. Lesley, starting from the bow it says -- it really says this: 'Rarely does one have the privilege of witnessing vulgar ostentation displayed upon such a scale,'" Perkins explains.

"So you're saying it yourself before anyone else can say it," Stahl remarks.

"Before anybody else can say it," Perkins admits. "I've said it."

But there's no protection against boredom when it comes to Tom Perkins and his toys: in February, he put the Falcon up for sale. The asking price: $180 million. He says the allure of the mega-yacht was in the building of it, and in overcoming its technical and esthetic challenges. But once he did that, he says he began to yearn for a new project, and now he thinks he's found it, converting a Navy mine sweeper hull into a 140-foot boat that can carry and service his new sports sub.

Exposing The Truth Of Abu Ghraib
Thanks for reading CBS NEWS.
Create your free account or log in
for more features.
View CBS News In
CBS News App Open
Chrome Safari Continue
Be the first to know
Get browser notifications for breaking news, live events, and exclusive reporting.