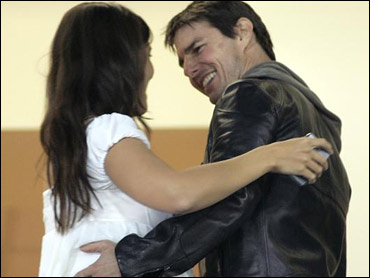 Tom Cruise has been practically shouting from the rooftops about his love for his pregnant fiancée, Katie Holmes. But when their much-anticipated baby is born, the superstar dad probably won't say a word.

Cruise, a longtime Scientologist who introduced Holmes to the faith, is likely to follow Scientology's practice of quiet birth. Followers believe the absence of talk and other noise in the delivery room is more healthful for mother and baby.

No one's saying publicly where baby Cruise will enter the world, but if it is at the actor's Beverly Hills home then noise control might prove a challenge. Buzzing paparazzi are already camped aside the property.

With the little one expected soon, tabloids and gossip Web sites have been rife with chatter about silent birth, spawning much speculation about what it is and isn't.

Some are sure it means the mother can't make a peep during childbirth - forget the popular image of a chaotic hospital-room scene with a laboring woman spewing invectives. Others have claimed silence must be maintained for a full week after the baby is born and that Scientology opposes medical exams for newborns.

According to the tenets of Scientology, known as "Dianetics," words - even loving ones - spoken during birth and other painful times are recorded by the "reactive mind," or subconscious. Those memories, adherents feel, can eventually trigger problems for mother and child.

What the doctrine doesn't say is that laboring moms can't make some noise during delivery.

"We're not going for absolute silence," said self-professed "Scientology mom" Michelle Seward. "If a sound is made, that's OK."

After years studying the faith, established in 1950 by fiction writer L. Ron Hubbard, Seward went the silent route for the birth of her son, Sage, five years ago.

Seward drew up a birth plan and discussed her desire for a wordless delivery with her doctor.

In the hospital delivery room, she used hand signals to communicate with her husband and mother. A nurse tapped her on the shoulder to tell her it was time to push. When a complication arose after 30 hours of labor, the doctor whispered to Seward that she would need an epidural.

"I had a happy, calm baby," she said. "I know it's because of the way I delivered him."

Scientology doesn't dictate where babies should be born or whether drugs can be used, she said.

Quiet birth "supplements whatever medical model the mother chooses," said Karin Pouw, a spokeswoman for the Church of Scientology International.

Beverly Hills obstetrician Stephen Rabin said he has never attended a silent birth but believes that verbal communication is key during delivery. While he supports limiting "extrinsic noise" and extraneous visitors in the delivery room, speaking to parents is still "extremely critical."

"It's almost impossible to do without words," he said. "You're not going to yell at the patient. You may talk to them in a calming fashion and the patient will gain comfort from hearing your voice."

Typical delivery-room talk might include direction on how to push and reassurance that the woman is doing it right, he said. A doctor may also need to explain pain medication or unexpected problems with the birth.

But as long as the planned approach isn't harmful, Rabin said, parents should choose the delivery method best for them.

Seward said silence doesn't just keep the subconscious clear, it also is more relaxing for the mother and less jarring for the newborn.

"The baby is coming from a dark womb," she said. "They come from a muted environment and they're thrust into this world."

Infants deserve to be born into a reverent place, agreed Mindy Goorchenko, a certified doula and birth educator whose own unassisted delivery of twins was featured on the Discovery Channel. The transition from the womb to the world should be peaceful, she said.

But moms, dads and doctors probably need to talk during delivery, Goorchenko noted.

"Communication is key in birth for all people involved," she said.

Sound can also be an effective means of working through labor, she added. Besides, the womb isn't as quiet as one might think; babies can hear voices, music and their mother's heartbeat, Goorchenko said.

"Infants respond in the womb to what's going on around them," she said. "Why at the moment of birth you'd suddenly need silence doesn't make sense physiologically."

Still, said Goorchenko, a mother of four, she wanted privacy during her deliveries and preferred silence following the births.

"You don't need loud, blasting noises while mother and child are bonding."