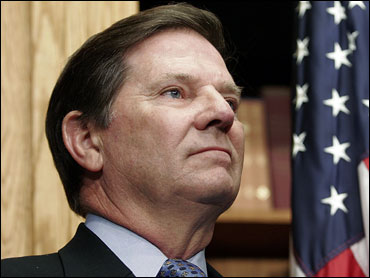 In an interview with USA Today, the once powerful and feared Texas Republican accused fellow party members of "panic, depression and woe-is-me-ism," -- an attitude that he said could cost the GOP control of the House in the November election if it isn't reversed.

The man nicknamed "The hammer" for his take-no-prisoners political style did not forget the Democrats: "Their campaign of character assassination and criminalization of politics was effective," DeLay told the newspaper.

DeLay, 59, has been indicted in Texas on charges of money laundering. He has also come under scrutiny by federal investigators probing the dealings of convicted lobbyist Jack Abramoff with members of Congress in an influence peddling scandal.

He announced in April that he was bowing out because the voters in his congressional district "deserve a campaign about the vital national issues that they care most about and that affect their lives every day, and not a campaign focused solely as a referendum on me."

On Tuesday night, members of the Texas delegation feted DeLay at a dinner in his honor at a restaurant in downtown Washington. He's expected to deliver a farewell speech on the House floor on Thursday , and to host an open house at his Washington office on Friday, his last day in Congress.

DeLay spent 21 years in Congress and was a key force in advancing the conservative agenda of President Bush, a fellow Texan.

His slide from power began about 19 months ago, when the House Ethics Committee admonished him for three incidents of misuse of his office as majority leader.

The succeeding months drew the scent of scandal ever closer to DeLay. Finally, in January, he gave up a bid to reclaim his job as majority leader.

DeLay told USA Today that he has run up $2.5 million in legal bills and plans to establish a legal defense fund to help pay off the debt.