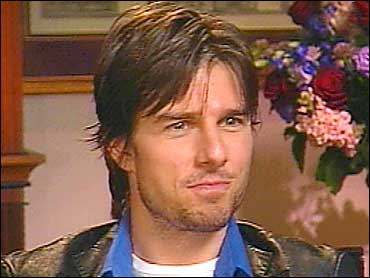 A-list actor Tom Cruise and Academy-Award winning director Steven Spielberg have been friends for 20 years and always wanted to work together.

"We just couldn't find anything," Cruise tells anchor Jane Clayson in the first of his two visits this week to The Early Show.

Then Cruise came across the script for "Minority Report," a science-fiction movie based on a story by Philip K. Dick. He sent it on to Spielberg.

"I read the script and then I went back and I read the short story," Cruise says. "The whole concept of people being arrested for a murder that they were going to commit in the future, I just thought it was a great idea... The story itself I thought, it just had the potential to be a great movie. It's cinematic."

The film that opens thus week, directed by Spielberg, is set in 2054, when police use psychic technology to arrest and convict murderers before they commit a crime. Cruise plays the "Precrime Unit" leader who may have committed a murder in the future himself.

Cruise, who is a few weeks shy of his 40th birthday, says that doing the film together enhanced the friendship. "We have so much fun outside of work and then... when we work(ed) together, it just solidified that relationship," Cruise says, "It was a blast."

Cruise, himself one of Hollywood's most bankable stars, says he told Spielberg, 55, during the first week of shooting, "You're Michael Jordan, you know you're Gretzky, you're Joe Montana. You're the Joe Montana of directors."

Cruise says Spielberg, who won the best director Oscar for "Schindler's List," used technological consultants to develop most of the gadgetry in the futuristic film. Cruise says Spielberg sat down with a group of scientists and said, "OK, what's the future gonna be like?" The technology in the film includes mechanical spiders that catch criminals by retinal screening, jet packs, and hovering craft.

As usual, Cruise does most of his own stunts in the film. "It's fun," he says. "It's something I can do, I don't like sitting in the trailer."

Cruise gained fame as a heartthrob in such movies as "Risky Business" and "Top Gun," solidified his dramatic credentials by playing opposite Dustin Hoffman in "Rain Man" and won a Best Actor Oscar nomination for his work in "Born on The Fourth of July."

In his latest film, his character, Police Chief John Anderton, deals with the devastating loss of his son. When developing the character, Cruise says, he did not draw on his own relationship with the two children he adopted with actress Nicole Kidman. He says, "I don't use my kids when I'm working. You know that's stuff that's... sacred to me."

Cruise and Kidman, his co-star in several movies, split up last year.

Cruise has been wearing braces to straighten his teeth, but says they will be off before he starts his next film - "The Last Samurai" - in October.