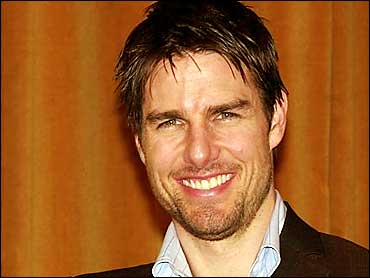 Hollywood's biggest star Tom Cruise acts opposite Jamie Foxx in the new film "Collateral." It's the latest collaboration for Cruise who has worked with some of the biggest names in the business.

In Friday's "Home Theater," The Early Show's entertainment contributor and People magazine senior editor Jess Cagle sat down with Cruise and looked back at some of the high-profile co-stars in his career.

In 1986, Tom Cruise teamed with Paul Newman for "The Color of Money." It was his first pairing with Hollywood royalty.

"Newman was cool and warm and funny," Cruise says. "There I am; I just finished 'Top Gun' and I'm sitting there looking at Newman going, "Whoa.' And you see how generous he is as a human being."

In 1988, he co-starred with Dustin Hoffman in the Academy Award winning, "Rain Man."

"Incredible," Cruise says, "Another guy just very generous with me. I was a young actor. I met him at a restaurant. Actually, I was with Cass, my little sister. Cass says, 'Go say hi.' I say, 'I'm not going up to Dustin Hoffman. He's Dustin Hoffman, you know.' She says, 'Tom you know, you love his work.' I said all right. She was hassling me and I finally said hello. He invited me to go back to 'Death of a Salesman' and he said we're going to work together sometime. It's one of those experiences, we used to drive to the set together every day. We'd work on the scenes and then go sit down with Barry Levinson and the three of us would work on the scenes and trade roles - incredibly generous."

And the learning continued with Jack Nicholson in 1992's "A Few Good Men."

Watching these actors perform is what Cruise says he loves doing.

As for Cagle's favorite co-star, Vanessa Redgrave, Cruise says, "How lucky was I? I mean, I gotta tell you, Vanessa in 'Mission Impossible.' I remember thinking, because that was written for a man - the role. I just went, you know, you think we can get Vanessa Redgrave for this?" And laughs.

Asked about his professional relationship with former wife Nicole Kidman, Cruise says, "Incredible actress. I remember I saw her. I was casting 'Days of Thunder." I saw her in 'Dead Calm." We were looking for the girl and I just went, 'Who's that?' Outside of the fact that she's stunningly beautiful, but you could just immediately see the talent.

"And the thing is with Nic, we'd shoot the thing and I'd go, 'Where is that going?' I'd go and look at the film on it and it was just that same thing, where it just comes right off, right off the screen. And I love that relationship, because you're so intimate together, and yet, I also know her work so well. And it's beautiful."

Cruise has always put his priorities on working with the best talent. So how did he know to do that as a 20-something young guy?

"Actually when I started - When I was 18, 19, I just wanted to learn," Cruise says. "For me, I didn't care about the money. And I think that the great ones, it's not an accident that they're great, because they have the basics and a command of the technical aspect of filmmaking. So they understand all that, but then it's their art

"Hopefully, I'll be able to work and have a job, and make enough money to pay for my family, do whatever. It doesn't matter to me."

So does he think that eventually, he' ll amount to something?

"Collateral" opens nationwide Friday. Tune in Monday morning for more about Cruise, his new film, fatherhood, and being the most eligible actor on the planet.