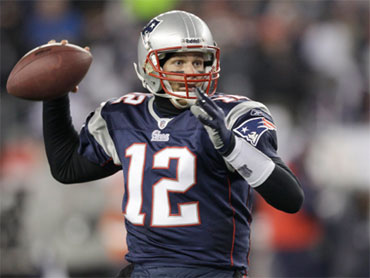 DALLAS - Tom Brady tore up the NFL with his precision passing and dynamic guidance of the New England Patriots' offense.

That was in 2007, when he ran away with The Associated Press NFL Offensive Player of the Year award. Ditto for 2010.

Brady won the honor Tuesday for the second time in four seasons. The record-setting quarterback, who had a string of 355 passes without being intercepted, received 21 votes from a nationwide panel of 50 media members who regularly cover the league. He easily beat Philadelphia quarterback Michael Vick, who got 11 votes.

"To me it comes down to the mental toughness and determination of the players and coaches," Brady said.

A unanimous choice for the All-Pro team, Brady threw for 36 touchdowns while being picked off just four times. When he won the award in 2007, Brady set an NFL mark with 50 touchdowns passes as New England went undefeated in the regular season.

Oddly, the Patriots did not win the championship in either of those seasons, but have won it three other times.

Brady doesn't sense much difference in the guy who took New England to a 16-0 mark back then and a league-best 14-2 this season.

"I feel our team really grew together over the course of the season. It was a privilege to be a part of this team," he said. "My only disappointment is that we couldn't take advantage of our opportunity in the playoffs, but hopefully we learn from that and use it as motivation toward accomplishing our goals for next season."

What Brady is doing isn't much different: He's winning, and he's piling up dominant stats.

Brady led the NFL with a 111 passer rating. His 65.9 completion percentage was second to Philip Rivers of San Diego - by .1. Nobody came close to his touchdown to interception differential: nearest was Matt Cassel at plus-20.

When not crediting everyone else, from coach Bill Belichick to his teammates to wife Giselle or his hair stylist, Brady explains his success as a matter of experience.

"I've been here for a while, so I've seen our offense evolve," the 11-year veteran said. "We do some different things now than we've done in the past. Ultimately we're still trying to do the same thing, which is be productive and win games."

Receiver Deion Branch, the MVP of the 2005 Super Bowl who returned to the Patriots from Seattle in midseason, believes Brady gets his edge because he can be a nerd.

"Tom studies a lot," Branch said late in the season. "We get the bulk of it in the meeting rooms with just the players when we sit down to go over the things that he's been looking at. It carries over to the practice field as well. Tom is a dork when it comes to that, so I'm going to leave that alone, but Tom is a dork in that meeting room."

A dork? Hardly a description often associated with a three-time champion quarterback married to a super model.

Also flattering: Brady is the only quarterback and the only active player to win the award twice.

Vick's comeback season led him to the Pro Bowl. After missing two seasons while serving a federal sentence for dogfighting, then sitting as a backup for the Eagles last season, Vick has a sensational year. He finished fourth in passer rating with a career-best 100.2, had 21 TD passes and just six interceptions. Using his unequaled skills as a running QB, Vick rushed for 676 yards and nine TDs. The nearest quarterback in that area was Josh Freeman of Tampa Bay with 364 yards.