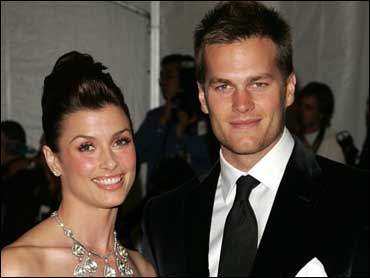 First Bridget Moynahan, then Gisele Bundchen, then a kid with the first and rumors of another with the latter.

Forget football. When it comes to love, it sure looks like Tom Brady knows what he's doing.

But it wasn't always so easy. While the eventual three-time Super Bowl winning quarterback thrived as a youngster on the field, he repeatedly stumbled off it, at least romantically, according to a column published in the latest issue of Sports Illustrated.

"You want me to help guys be cool?" Brady asked columnist Rick Reilly after he asked if Brady would be willing to give out dating advice to others. "Why me? I was the little sports nerd in high school who hardly ever had a girlfriend."

But Brady has had several girlfriends since, including Moynahan, who gave birth to their first child, John Edward Thomas Moynahan, three weeks ago.

"I kind of cuddled him like a football," Brady told SI, admitting that it's hard for him at times not to be with his son in Los Angeles on a regular basis. "I'd love to be out there all the time, year-round, but it's hard to make that a reality. But I'll start lobbying for off days throughout the year."

But not all is good in Brady's life. His celebrity status has also had its downside, particularly when he leaves his home.

"I mean, I'm just walking out the door, you know?" Brady told the magazine. "And people follow me! I have to disguise myself now. I never go out without a hoodie on. My head is always down! I never make eye contact with anymore! It's like I'm not even myself!"

Brady also said that he refuses to boost himself in the public eye via television ads, regardless of the loads of money that may be thrown at him.

"You realize you're turning down a lot of dough, yeah, but it's just not me," Brady told SI. "I'm just not going to go out and do a Chunky Soup ad. … Like that (MasterCard) ad Peyton did about, 'Cut that meat! Cut that meat!' Our D-line yelled that every time he came up to the line. 'Cut that meat!' Man, I'm so glad I didn't do that one."

Though he said that he wasn't sure if his methods would work for all, he did offer some advice for men struggling romantically, particularly on how long to keep the date going and what music to play when alone together.

"Whatever you do, keep 'em short," Brady told the magazine. "You can't let them know you're that interested."

As for music, "definitely not Metallica," he said. "And no girl music, like Madonna. Something in between. John Legend always works for me."