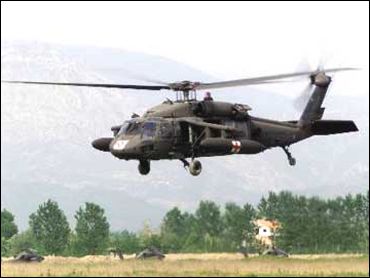 Most soldiers leave behind husbands or wives when they are deployed, but for Capt. Gretchen Cahill and her husband, Chief Warrant Officer Paul Cahill, togetherness is flying Blackhawk choppers in the 12th Aviation Brigade.

The Cahills have been married for four years. They don't have children, but they did have to find relatives to "adopt" their two cats during their Middle Eastern deployment. The two met at advanced Army flight school, where CWO Cahill was Gretchen's instructor.

The two are serving in the same brigade, thanks to a program called "Married Army Couples Program" (MACP). This program serves dual-military spouses by considering them for assignment together to establish a joint household while fulfilling the mission of the Army. Currently there are 21,710 soldiers enlisted and enrolled in this program.

The couple never flies together in the same aircraft, but do get to see each other an hour or so every day.

Capt. Cahill says, "We're very happy we got stationed together. In this type of environment, it's nice that we're able to see each other every once in awhile. It's still stressful, though, because we're both working our job and off doing other things. So we don't get to spend couple time together like when we're at home, spend a weekend together or have dinner together. It's not quite the same, eating an MRE on the end of a cot after a hard day of work."

Capt. Cahill agrees but says she thinks she would worry more if they were apart. "Right now, we're in a situation where I know what he's going through. I know what missions he's going on. So I at least have firsthand knowledge. Whereas if we were separated I might not know where he was going or what he was doing. So in some areas, I think I might worry less if we're together."

At the end of the interview, The Early Show surprised the couple by allowing them to talk to their families via videophone.