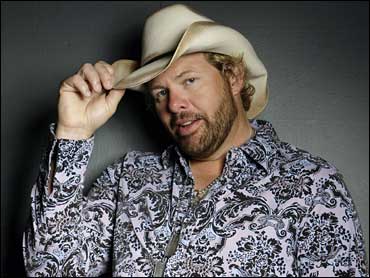 Country superstar Toby Keith may have gotten a taste of acting, but he admits that there isn't anything that wets his appetite quite like performing his country gigs.

"It's (acting) fun if you can prepare," Keith told Early Show features reporter and weatherman Dave Price. "It ain't something I want to do for 12 months a year. I have a night gig."

Keith, who has had five number one albums, 16 number one singles and has sold over 30 million records, tried his hand at writing and starring in the movie "Beer For My Horses," which opens Aug. 8 nationwide.

"It's a movie me and a friend of mine, Rodney Carrington, the comedian, wrote this after I did the video and had the big six-week number one three or four years ago with Willie Nelson 'Beer For My Horses,'" Keith said. "I wanted to tip the hat to old Burt Reynolds and kind of do an old southern road romp comedy like the movies he used to make that I don't think they make anymore."

The movie is in the genre of "Cannonball Run" or "Smokey And The Bandit."

"We hooked up at my ranch. I turned Rodney loose on my story about a methamphetamine operation in Oklahoma bothering the rural people, and he put the funny in it," Keith said.

Keith began his acting career in 2006 when he appeared in "Broken Bridges."

Now that the movie is made, Keith is going full-throttle with the release of his new hit single, "She Never Cried In Front Of Me" from his new album, which will be released on Oct. 28.

Keith said all he really needs is several hours at the beach to draw inspiration and the lyrics come flowing.

"I write all the time. I write all year. At the end of the year, I gather my songs up, take them in, record them and then whatever 12 or 13 float to the top is what we put on the album," he admitted.

The Oklahoma native is thrilled with his new album and has a particular fondness for the song "Beer For My Horses."

"Yeah, me and a friend of mine Bobby Penson wrote that song at my house," Keith said. "In fact, he wrote it on my piano. We usually write on a guitar. I have a piano in the living area. He sat there and we wrote it in the living room."

Whether it be at the ranch, the beach or in his living room, Keith's creative juices keep flowing.