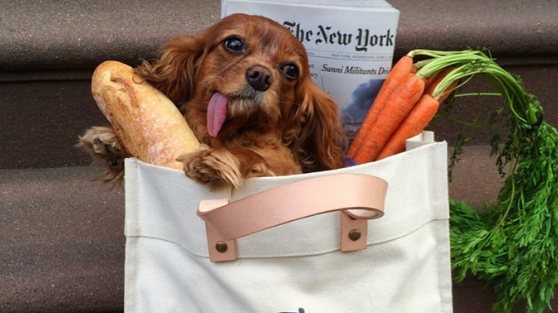 This #NationalDogDay, Toast is a dog on a mission.

It’s easy to see why this pup has become such a star on Instagram, where her photo feed, Toast Meets World, has more than 368,000 followers. After all, in the words of her owner Katie Sturino, “Just look at her! She is adorable!”

But for Toast, a King Charles spaniel, the path to internet stardom was tough.

“Toast is a former puppy mill breeding dog. She was used to make puppies for pet stores,” explained Sturino. “I learned about the ‘factory farming’ method that the pet store industry uses from my first rescue, Muppet.”

While Toast is now enjoying life as a social media sensation, she’s not just taking cute pictures, she’s also helping save other animals in the process.

“We were thrilled to be a part of Clear the Shelters, an initiative that aims to motivate people to adopt, rather than buy a pet,” said Sturino. “Toast was also one of the stars of the Shelter Pet Project and is on billboards all over the country.”

Sturino and Toast also work with Friends of Finn, a project of the Humane Society, to raise funds and awareness about puppy mills. “We try and drive people to that organization whenever possible!” Sturino said.

How exactly does a dog work with an organization? By writing a book, of course! Toast Hampton hit shelves in May and a portion of it’s proceeds have gone toward helping Friends of Finn.

So if you’re trying to come up with a #NationalDogDay activity, maybe check out a local shelter. You never know, you might save a future star.