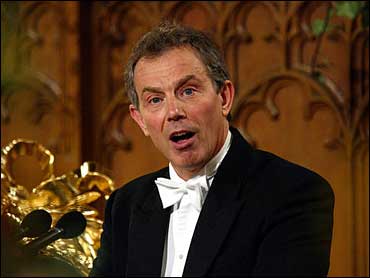 Firefighters are heroes, especially in America, of course, where memories of 9/11 are still fresh ... but also here in Britain. They risk their lives to save others, and they don't get paid much for that bravery -- certainly not as much as they think they should get.

This year, their union leaders here decided to go for a big pay rise to put that right, and demanded 40 percent. They didn't really expect that much, but they DID expect a lot more than the four percent they were offered.

And so now they are on strike, for the first time in 25 years, leaving our armed forces to provide a replacement service. But they're not allowed to use the fire fighters' shiny red engines; instead they're having to make do with ancient military appliances nicknamed 'Green Goddesses' with a top speed of 35 miles an hour, and a frustrating habit of breaking down on the road. Pictures of young soldiers pushing their Green Goddess towards the fire don't inspire confidence.

But our Prime Minister Tony Blair can't afford to give in. Millions of other public workers are watching this increasingly bitter struggle and are standing by with their pay claims if the fire fighters win. So the government's message to the strikers is: there's no more money unless you change your working habits... that means working harder and longer and more efficiently. So that's the first problem for Mr. Blair -- the fire fighters have to be beaten, so he can show us that he's tough. But the second problem is even more tricky -- those Green Goddesses are operated by 19,000 members of the armed forces, who ought to be spending their time preparing for an invasion of Iraq. Britain's top soldier has publicly and defiantly warned the Government that we can't do both. All of which leaves Tony Blair with his biggest challenge so far. He has to hold his nerve and win the struggle with the fire fighters -- and he has to ensure our troops are properly prepared for war with Iraq.

That famous Blair smile is still in place, but the worry lines are showing.
by Peter Allen