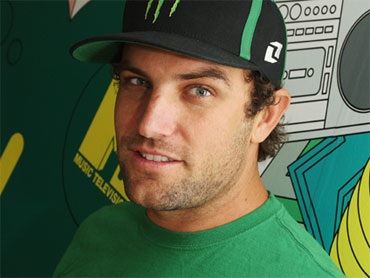 BMX Star and MTV personality T.J. Lavin is in a medically induced coma after crashing his bike at an event in Las Vegas Thursday night, TMZ reports.

Lavin was competing in the Dew Tour event when he lost control of his bike going over a dirt ramp. According to MTV, his feet were unable to reach the bike's pedals, catapulting him through the air and knocking him unconscious. His friends and crew saw that he was motionless and unresponsive.

According to TMZ, his other injuries include a shattered wrist and broken ribs.

He is also the subject of the movie "A Film about TJ Lavin," according to his website.

A video which captured the accident has since been blocked on copyright grounds.