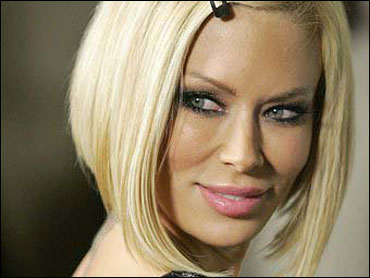 LOS ANGELES (CBS/AP) UFC champion Tito Ortiz claims his ex-porn star girlfriend Jenna Jameson is addicted to Oxycontin, and blames her drug use for his arrest Monday on suspicion of domestic violence.

The mixed martial arts star was arrested in Huntington Beach at the home he shares with Jameson and their twin sons. Several hours after posting bail, Ortiz and his attorney accused Jameson of having a drug addiction and said that Ortiz never struck her.

"Jenna Jameson has been fighting an ugly battle with an addiction to Oxycontin for well over a year, and this morning, she had a relapse," attorney Chip Matthews said. "We're here because Tito was trying to help her. Tito Ortiz never laid a hand on Jenna."

Ortiz wept openly at the hastily arranged news conference at an Italian restaurant in North Hollywood.

"My parents have gone through an addiction, and I'm seeing a mirror of that," Ortiz said. "I hold everything dear to my heart that Jenna will be OK."

Ortiz is a former UFC light heavyweight champion whose celebrity has eclipsed his MMA accomplishments since he began a relationship in 2006 with Jameson, perhaps the world's most famous adult film actress. Jameson, who crossed into the mainstream after publishing a popular autobiography in 2004, gave birth to the couple's twin sons, Jesse and Journey, in March 2009.

Matthews said the 35-year-old Ortiz found drugs in their home Monday morning, leading to the confrontation that ended with Ortiz's arrest. Matthews also claimed the 36-year-old Jameson has made 911 calls threatening suicide over the past year, but Ortiz stuck with his partner of four years in hopes of salvaging their relationship.

"I cant take any more abuse from ANYONE.. To my sweet fans...thank you," the message read.