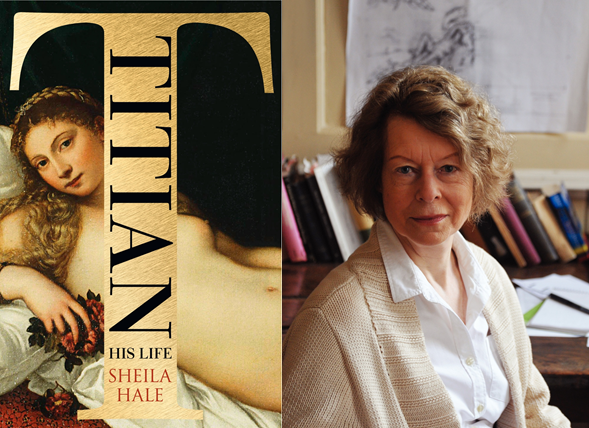 Jeff Glor talks to Sheila Hale about , "Titian: His Life."

Sheila Hale: I'd always admired Titian, but it had not occurred to me to write about him until Stuart Proffitt, the publisher of my previous book The Man Who Lost His Language, made the suggestion, mostly on the basis of my guidebook to Venice. I then turned to an old friend, the Titian scholar Charles Hope, who has seen more documented primary sources about Titian than anyone else but not yet published them. Not only did he encourage me, he put all his documents on a flash drive and gave it to me. I then discovered that there had been no fully documented biography of Titian since 1877, and I took the decision to set Titian's life in the context of the period, which was so very different from our own times.

SH: I was surprised by the sheer volume of information that has survived about Titian's personality and relationships with his patrons, family and friends, more than about any other Renaissance artist except Michelangelo. But perhaps the best thing about getting to know Titian and following his career closely from beginning to end is that my admiration turned into something closer to awe for his protean genius, the way his painting continued to change and develop until the very end of his life. Another surprise, one that seems to disconcert some readers, is that when not painting, he seems to have been a rather ordinary man: sociable, selfish although concerned about his family and a loyal friend, obsessively interested in money, probably monogamous. Too many people seem to expect great artists to be mad bohemians or tortured souls like Michelangelo.

SH: As a child I wanted to be a doctor or a concert pianist. Now I suppose I would spend more time with friends and family, listening to music, gardening, travelling, going to the theatre, and working for neglected causes, especially better understanding and treatment of aphasia, the loss of language that my late husband suffered at the end of his life and the subject of my book "The Man Who Lost His Language."

SH: I usually have two or three books on the go at the same time. At the moment I seem to be mostly catching up with books by friends. I've just finished Claire Tomalin's "Life of Dickens" and am looking forward to her husband, Michael Frayn's, latest novel "Skiros" and his memoir "My Father's Fortune." Have started Ross King's "Michelangelo" and the "Pope's Ceiling." An Italian friend, a former ambassador to India, has sent me his "L'elefante a messo le ali" (The Elephant Has Sprouted Wings) about India in the 21st century.

Also towards the top of the pile is Edmund de Waal's "The Hare with Amber Eyes," just because so many people have told me it' so good. Then I look forward to settling down with Hilary Mantel's "Woolf Hall" and "Bring up the Bodies." I love her short stories and shorter novels.

SH: I've been toying with several ideas but the only one that haunts me at the moment would be a play called Titian's Best Friend about Titian's relationship with Pietro Aretino, the rather nasty bi-sexual egomaniac powerbroker, playwright and pornographer who figures large in my life of Titian. Aretino understood and wrote about Titian's painting better than any other contemporary, but there was always an element of competition in the friendship, Aretino trying to prove that words are more expressive than painting (the superiority of one art form over another was a big preoccupation in the Renaissance), Titian always proving him wrong. At first Titian depended on Aretino for finding patrons; in the end Aretino was rather pathetically clinging to Titian's coattails.

For more on "Titian," visit the Harper Collins website.