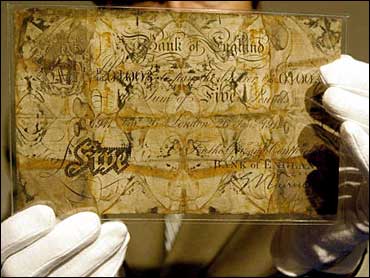 Collectors began sinking thousands of dollars at a sale billed as "the most exceptional assemblage of Titanic material ever to be offered at auction."

In a white tent adjoining the South Street Seaport Museum, auctioneers opened bidding Thursday on hundreds of items linked to the legendary ship, which went down in the North Atlantic on April 15, 1912, during its maiden voyage after hitting an iceberg. About 1,500 people died. The ship now rests at the bottom of the ocean, 2½ miles down.

The lots auctioned by Guernsey's ranged from artifacts salvaged amid flotsam on the night of the disaster to more tangential memorabilia striving for association with the ship and James Cameron's 1997 blockbuster film.

The opening lot brought $250, minus commission, for a framed advertisement pitching Vinolia Otto toilet soap, a product apparently used on the Titanic, which once boasted "a higher standard of toilet luxury and comfort at sea."

The sale, titled "Titanic and Other Legendary Liners," is also offering objects from other storied luxury liners including the Normandie, Olympic, Lusitania and the Andrea Doria.

According to Guernsey's President Arlan Ettinger, the auction has generated interest from buyers and media around the world.

"In terms of dollar potential, this is not a huge auction for us," he said. "But in terms of public interest, there are few precedents to match it."

The auction also attracted a new generation of collectors.

Adem Potarkovic, who described himself as "almost 11" and "a huge Titanic fan," said he had persuaded his mother to drive him to New York from Indianapolis for the auction. He said that he had watched nine Titanic documentaries in preparation and brought along a reserve of $387 "from birthdays and hard work" with the hope of nailing down a signature from John Jacob Astor, who perished with the ship.

Most of the Titanic artifacts come from the collection of three men who decided to liquidate their Titanic holdings.

One of the men, Tony Probst, acquired one of the world's largest Titanic collections after finding inspiration in Cameron's movie. In the first session of the auction, one of his pieces — a brass plaque from the builders of the Titanic — fetched $7,000, minus commission.

Another of the three collectors, Gary Robinson, said that watching the auction was "like losing a child," but he added that he was happy for the excitement and would be starting his collection over.

The auction's biggest-ticket items included letters from famous passengers, menus from their last suppers and a deck chair recovered by a rescue ship.

Also on sale was a postcard sent by postal clerk James Bertram Williamson to a Miss Gladys Copeland, in which he expressed a hope that she would fulfill a promise to kiss him for a souvenir. It was sent from the boat's first stop, Cherbourg, France.

A friend "wanted me to wait last night for you to fulfill your promise," Williamson wrote. "This is a souvenir of Titanic's maiden voyage." Williamson died in the tragedy.