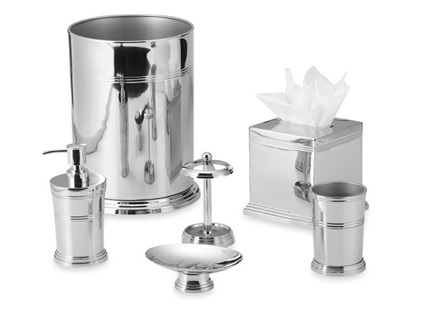 NEW YORK — Metal tissue holders contaminated with low levels of radioactive material may have been distributed to Bed, Bath & Beyond stores in more than 20 states, including New York, federal regulators said Thursday.

He said there is little to no risk to human health — but it's better to avoid unnecessary exposure to radiation.

"If someone has one of these, they could receive a small radiation dose from it," he said. For example, he said someone keeping one of the boxes on a vanity in the bathroom and spending about 30 minutes a day near it for a year would receive the equivalent of a couple of chest x-rays.

"There's no real health threat from these, but we advise people to return them," he said.

Bed, Bath & Beyond Inc. said in a statement Thursday that its Dual Ridge Metal boutique tissue holder has been carried in about 200 of its stores since July. It said it was recalling all of the tissue holders and asking any customers who bought them to return them for a full refund.

Nevertheless, the company said it was asking for customers to return any purchased tissue holders out of an abundance of caution.

The contamination was first discovered in California when two packages bound for Bed, Bath & Beyond stores in Santa Clara and San Jose containing four tissue holders triggered radiation alarms at truck scales, according to a Jan. 6 report posted on the NRC website.

The products were shipped from India through the port of Newark, N.J., the report said. The tissue holders are distributed by Tatara Group of Piscataway, N.J. The Dual Ridge line of products is described on the company's website as having a "brushed finish."

A woman who answered a phone listed for the company declined to comment.

The Nassau County Department of Health, where two of the boxes were shipped to the retailer's stores, said the items were removed and taken to a "safe location." The county Health Commissioner reiterated that the boxes posed "no imminent public threat."

State Health Commissioner Nirav Shah said in a statement Thursday that none of the products had been sold at the New York stores.

Authorities said the tissue holders contain manmade cobalt-60, which is used in medical devices and for other industrial applications.