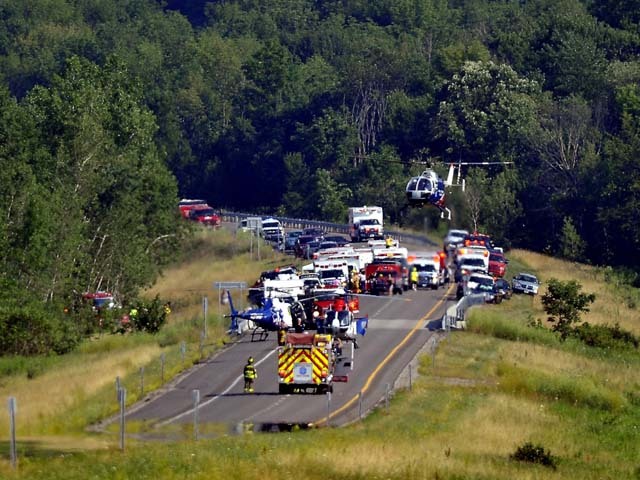 The driver of the Niagara Falls-bound bus, which was carrying Indian nationals from Washington, D.C., lost control Sunday and ran off Interstate 390 into woods near Avoca, 55 miles south of Rochester.

Ambulances and helicopters took seven of the most seriously victims to a hospital in Rochester, and three were in guarded condition there Monday.

Investigators believe "there was a flat tire just prior to the accident" but the cause of the wreck remains under investigation, state police spokesman Mark O'Donnell said.

The bus, owned by Bedore Tours of North Tonawanda near Buffalo, left Washington on Sunday morning and stopped for lunch in Pennsylvania, O'Donnell said. He didn't have any other details on the passengers.

The bus owner declined to comment Monday. According to the state Department of Transportation's Safety and Fitness Electronic Records, Bedore Tours has a satisfactory safety rating and has no recorded accidents in the past two years.

Investigators planned to interview the driver and witnesses and to inspect the vehicle to determine if there were any mechanical problems, O'Donnell said.

Tour bus industry safety has drawn heightened attention since the March 12 crash of a bus returning to New York City's Chinatown after an overnight excursion to a Connecticut casino. Fifteen people were killed when the bus toppled off an elevated highway and struck a utility pole, peeling off its roof.

A passenger has said the driver fell asleep; the driver has said he was alert and well-rested. That crash is being investigated by state police and the National Transportation Safety Board.

In January 2005, a bus chartered by a Canadian women's youth hockey team rammed a parked tractor-trailer along I-390 near Geneseo, about 30 miles north of Sunday's crash, killing four people. Investigators determined the driver's lack of sleep and inexperience led to the crash.