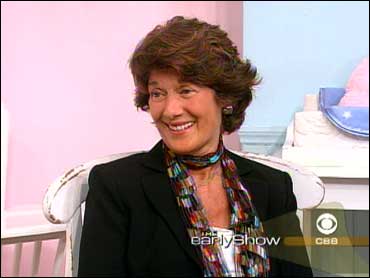 For many parents, the idea of putting a newborn baby on a schedule might seem a little hard to believe. But many experts say establishing a routine for infants is imperative for both good eating and good sleeping habits.

Melinda Blau, co-author of "The Baby Whisperer Solves All of Your Problems." points out that what works for adults is just as effective for infants.

"You get up, inspect the morning and have your coffee. If something jars that routine, it's upsetting to you. It's the same with babies. They like the safety and predictability of a routine," Blau told The Early Show co-anchor Hannah Storm. "The other important part about a routine is that it lets the mother or father know where the baby is in his or her day. So if you have a little baby and you fed him and 15 minutes later he's crying, you know that he's not crying because he's hungry. Something else is going on."

Blau suggests that the best time to start a newborn on a routine is as soon as they come home from the hospital.

"You may not be able to do it" Blau said. "I mean, it is a goal that you go for, and what we advise in the book is that you keep track and know when you fed the baby, how long the feed is."

A discussion of feeding provides an opportunity to introduce a Baby Whisperer acronym to help new parents establish a routine: EASY.

And after "Eat" comes "Activity." Conventional wisdom is that most babies tend to fall right to sleep after eating.

"That's not good. You don't think any of it now, but what about when the baby is four months old and only wants to … only can go to sleep after a bottle or being on the breast. That's what we call accidental parenting because you set up a pattern," Blau said. "Instead, start from the beginning teaching the baby to be essentially on the same schedule we're on. We get up in the morning and have an activity. ... They do it four times a day."

Next is "Sleep," and Blau suggests that it's better if babies don't sleep too long.

"Especially in the beginning. Babies don't know the difference between day and night," Blau said. "They are on a 24-hour clock. So if you get a baby home from the hospital and the baby … the mother says, 'Oh, he's just so great. He slept five hours.' Well, is she wondering why he's up all night?"

Blau said a baby shouldn't sleep for more than two hours during the day.

The final piece in the EASY acronym is "You."

Blau says parents need to take a little time out for themselves.

"The thing is you sleep when they sleep. It's imperative," Blau said.

Baby Whisperer has an interesting philosophy for the end of the day. It's called cluster feeding. An example would be feeding a baby at 6 p.m. and then instead of waiting several hours, feeding the baby again at 8 p.m.

Blau credited her co-author, Tracy Hogg, who passed away after the book was written, with coming up with the concept.

"Her philosophy was you tank babies up," Blau said. "By giving them more in their little bellies before they take a nap, they're more likely to sleep longer stretches."

Another idea advocated by Baby Whisperer is what they call a "dream feed."

"And we call it the dream feed because you don't actually wake the baby, Blau said. "You basically take the baby out of the crib and give it a breast or bottle and don't even change it unless it's really soiled and then put them back to sleep."

Some people might argue this is more convenient for parents than it is for the baby. That allowing the baby to sleep through the night maybe doesn't benefit the baby.