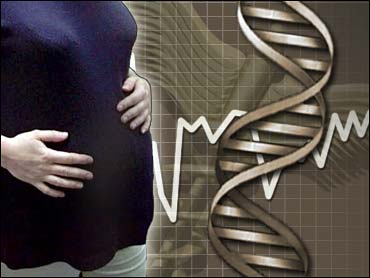 Pregnancy is a time when you are not only taking care of your body, but also helping your baby to develop and grow.

But just as important as what you do eat, is what you skip. Also remember that certain "unhealthy" foods now can take on a new and sometimes more ominous meaning when you are pregnant.

"Foods that you might not be so worried about - like caffeine or alcohol - can become a worry once you are pregnant, simply because we don't have all the answers about what can and cannot affect a developing baby," cautions NYU Medical Center nutritionist Samantha Heller, MS, RD.

Diane Ashton, MD, assistant medical director of the March of Dimes agrees and adds: "I think most women are concerned about what they should and shouldn't eat, but I don't think we can repeat the information often enough - particularly when it comes to the items that should be avoided."

To help make sure you know what you need - and what you should avoid - Heller and Ashton helped put together the following guide.

The 5 Foods to Avoid During Pregnancy

In the not-so-distant past some doctors suggested moderate drinking during pregnancy might be OK. Not anymore. In an advisory issued by the U.S. government in February 2005, U.S. Surgeon General Richard H. Carmona, MD, MPH, issued a warning that no amount of alcohol can be considered safe during pregnancy.

The reason, says Ashton is that "no one knows if there is a threshold for alcohol in pregnancy, and if there is, what it is, so it's better to just not drink any at all."

What doctors do know: Alcohol increases a baby's risk of fetal alcohol spectrum disorder (FASD) - a series of developmental problems that can affect a child's ability to learn throughout their lifetime. In its most extreme form fetal alcohol syndrome (FAS) can cause varying degrees of birth defects and mental retardation.

"There's a whole spectrum of ways alcohol can affect the fetus - it may not be a full-blown FAS but there may be low birth weight, small stature, a range of possible side effects," Ashton tells WebMD.

If your pregnancy was a surprise - and you unknowingly consumed alcohol during the first several weeks after conception - experts say don't panic. If you stop drinking the moment you discover you're pregnant, and meet your daily requirement of folic acid (400 micrograms) you can dramatically decrease your baby's risk of any serious consequences.

While some doctors are leery about using any artificial sweetener during pregnancy, the one that is of most concern is saccharin. The reason: "It has been shown to cross the placenta and end up in your baby's bloodstream," says Heller.

This is of concern since some animal studies have shown that in high enough amounts saccharin may increase the risk of bladder cancer. Since research on monkeys has shown that a developing fetus is much less effective at clearing saccharin from the blood than an adult, at least theoretically, amounts of the artificial sweetener can build to a dangerous level.

"It's always best to err on the side of caution and avoid it," says Heller.

If you were consuming saccharin before you knew you were pregnant, don't panic. The risks are small during the early weeks of pregnancy. As long as you don't consume any more, your baby's health should not be affected.

As to other artificial sweeteners: There is no specific evidence to show harm to mother or baby.

No. 3: Seafood With High Mercury Level

Fish can be one of the healthiest foods you can eat - particularly during pregnancy. A diet that includes a variety of fish and shellfish helps a child's growth and development. Women of childbearing age, in particular, should include fish or shellfish in their diets because of the nutritional benefits.

However, Ashton reminds us that high levels of mercury contamination could turn eating some seafood into a serious risk with the potential to harm the nervous system of your developing baby.

As such, in 2004 the FDA and the Environmental Protection Agency warned pregnant women, those looking to get pregnant, nursing mothers, and children, to avoid all seafood high in mercury. This includes larger fish that live longer such as shark, swordfish, King mackerel, and tilefish.

According to the March of Dimes, you can safely consume up to 12 ounces (two average meals) per week of fish that is lower in mercury. This includes shrimp, canned light tuna, salmon, pollack, and catfish. The FDA, however, suggests limiting albacore (white) tuna, and tuna steak to 6 ounces per week. These two contain more mercury than canned light tuna.

In addition, Heller cautions against eating any kind of raw fish during pregnancy - regardless of the type, since it can "harbor bacteria and parasites that are very dangerous during pregnancy," she tells WebMD.

In moderate amounts caffeine is not likely to be harmful. But experts say there is some concern that in greater amounts beverages or medicines containing high levels of caffeine could pose a problem.

"There isn't anything definitive on caffeine but there is some suggestion it may increase the risk of miscarriage and low birth weight - plus, it's a mild stimulant and a diuretic, both of which are not ideal during pregnancy," says Aston.

If you can avoid it, she says, that's good. If you can't Ashton says try to limit consumption to about 300 mg daily, the amount found in around 3 cups of coffee.

The March of Dimes also reminds us that sodas (such as Coke, Pepsi, and Mountain Dew) as well as certain medications (such as Anacin) also contain caffeine, so be sure to count them into your daily tally as well.

No. 5: Unpasteurized Cheeses and Lunch Meats

The problem here is a form of food poisoning known as listeriosis . Caused by a bacterium known as Listeria monocytogenes, it can increase the risk of miscarriage, premature birth, or stillbirth. A newborn baby exposed to Listeria can become seriously ill and die.

This bacteria lurks in foods that are unpasteurized - particularly soft cheeses such as feta, Brie, Camembert, Roquefort, blue-veined, queso blanco, queso fresco, or Panela. Listeria can also be found in unpasteurized fruit juices, as well as hot dogs or deli meats such as ham, turkey, salami, or bologna.

Heller says that because pasteurization kills this bacterium, any soft cheese made from pasteurized milk is fine to eat.

While most of the time the label will say if, in fact, the product is pasteurized, Heller tells WebMD that "If you're not sure, don't hesitate, just skip it."

To reduce risks from luncheon meat, hot dogs or deli meats, plunge it in boiling water, or heat until it's steamy hot. This will kill the bacteria.

5 Pregnancy Super Foods You Should Have

All Bran Cereal With Extra Fiber

In research conducted at the Swedish Medical Center in Seattle, doctors found that 24 grams of fiber daily reduced risks of preeclampsia (a dangerous form of high blood pressure) by a whopping 51 percent. Plus, the extra fiber can reduce constipation and help you avoid another common pregnancy problem: hemorrhoids . Most important, many high-fiber cereals are also rich in folic acid. This is important to reduce the risk of birth defects. Cereals containing high fiber and 100 percent of your daily folic acid need include: Kellogg's All Bran, Total Wheat Flakes, Total Corn Flakes, TotalRaisin Bran, Product 19, Multigrain Cheerios, and Smart Start.

Just 2 cups a day can reduce your blood pressure by up to 10 points, according to experts at The Cleveland Clinic. This could be critical if your pressure rises during pregnancy. The high vitamin C count may also help reduce your risk of preeclampsia (see Banana Strawberry Smoothie). If you choose a brand fortified with calcium, such as Minute Maid or Tropicana, you'll be adding an additional nutritional boost. Orange juice contains a good amount of folic acid - about 15% of the recommended amount of folate each day in an 8-ounce glass.

This drink is so packed with baby-friendly nutrients it could help reduce pregnancy complications . In a study published in the journal Epidemiology doctors found pregnant women who consumed lots of C-rich foods - such as bananas and strawberries - had a lower risk of preeclampsia. Studies from the University of North Carolina at Chapel Hill show women lacking vitamin C during pregnancy may have an increased risk of premature rupture of membranes - a leading cause of premature birth. Plus, experts say high-calcium foods like yogurt and milk may help control fluid retention which may further decrease your risk of high blood pressure. To make a smoothie: Combine strawberries and bananas with low-fat milk, or yogurt, plus some ice, in a high-speed blender. Blend until creamy and smooth - and drink up!

Although the FDA advises limiting salmon to 12 ounces per week, studies published in the BMJ showed just 6 ounces weekly reduces the risk of premature birth from 7.1 percent to just 1.9 percent.
To help your newborn sleep soundly, try eating more fish during pregnancy. Indeed, research published in the Journal of Clinical Nutrition showed babies of mothers who consumed fatty acids found in fish during their last trimester, had healthier sleep patterns. The key component here is a fatty acid known as DHA, which is abundant in cold-water fish such as salmon.

The obvious pregnancy benefits here include high calcium and high protein - both important to your developing baby. But these same foods might also help reduce muscle cramping, a sometimes troubling problem during pregnancy. Calcium can also reduce uncomfortable bloating and water retention. In addition, medical literature indicates that, anecdotally, eating yogurt during pregnancy appears to reduce the risk of yeast infections - another common pregnancy problem.

Colette Bouchez is the author of Your Perfectly Pampered Pregnancy: Health, Beauty, and Lifestyle Advice for the Modern Mother-to-Be.
By Colette Bouchez
Reviewed by Louise Chang
©2005-2008 WebMD, LLC. All rights reserved