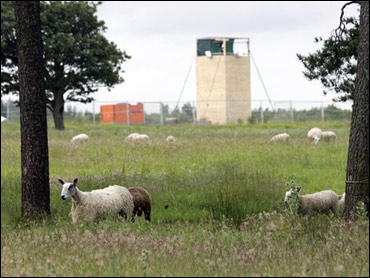 This quiet village in the foothills of the Scottish Highlands is about to play host to eight world leaders and thousands of demonstrators when the G-8 group of wealthy nations' most closely watched summit in years gets under way nearby on Wednesday.

Residents of the tiny town, just a few miles from the Gleneagles golf resort where the politicians will stay for their three-day meeting, are wary.

While others debate African poverty and global warming, the two topics Prime Minister Tony Blair has put at the top of the summit agenda, Auchterarder — population 4,000 — is fretting about traffic, troublemakers and even terrorism.

A bomb scare shut much of the town's main street for more than an hour Tuesday morning, rattling some residents' nerves.

"I'm a bit apprehensive," said Fiona Robertson, 60, who's lived in Auchterarder all her life. "We haven't had anything like this before."

Retiree Jessie Roy and three friends, caught on the wrong side of the road closure for much of the morning, were unable to get home, so they stopped to have sandwiches and coffee on a bench outside the community's school.

Roy wondered where the demonstrators expected on Wednesday would march.

"Our streets are not wide enough for all those people. This is the only street we've got," she said, gesturing at High Street, the village's main road.

Officials have issued a permit for 5,000 to protest on the edge of the village shopping district, but many more could show up. An anarchists' demonstration that turned violent in the Scottish capital Monday is adding to unease.

Most G-8 protests so far have been in Edinburgh, including a peaceful anti-poverty march of about 200,000 people Saturday, but the focus will shift to Gleneagles and Auchterarder when the leaders arrive.

Police have mounted a huge security operation, ringing Gleneagles with a steel mesh fence dotted with watchtowers and closed circuit television cameras. About 3,000 officers from around Britain are in the area. They've closed many back roads and are checking suspicious cars alongside the main highway.

Alexa Anderson, 18, working in an upscale card and gift shop in Auchterarder's center, said all the fuss was keeping customers away.

"A lot of people have gone away on holiday this week," she said. Those still around "will just steer clear, because it's difficult to know what to expect."

The region, about 50 miles northwest of Edinburgh, is filled with lush golf courses and rolling green hills and normally draws lots of tourists in the summer. Linda Giannandrea, owner of Auchterarder's Fish and Chip Company, said most seemed to be staying away ahead of the summit.

For several days, she said, "it's been like a ghost town, it was eerie. All we could see was police vans going up and down the street."

A few shops in town had boarded up their windows for the protests, but most were open — and empty. Giannandrea said she wasn't worried about violent anarchists causing trouble, and planned to keep her take-out restaurant open during the protest.

"If everything goes peacefully, ... (the demonstrators) will need a place to eat," she said.

Kirsty Lumsden, working in a local sandwich shop, was upset for a friend who had to move her horses from the field where they normally graze. The farmer who owns the land was renting it out to a group of protesters, Lumsden said.

Others found it exciting to be near the center of international events for a few days, despite the inconvenience. In several store windows along High Street, banners with words "Make Poverty History," the slogan of those urging the G-8 to act to aid Africa, were on display.

If the leaders including Blair and U.S. President George W. Bush do forge an agreement on poverty or global warming at their meeting, Auchterarder would have had a little part in history, Giannandrea said.