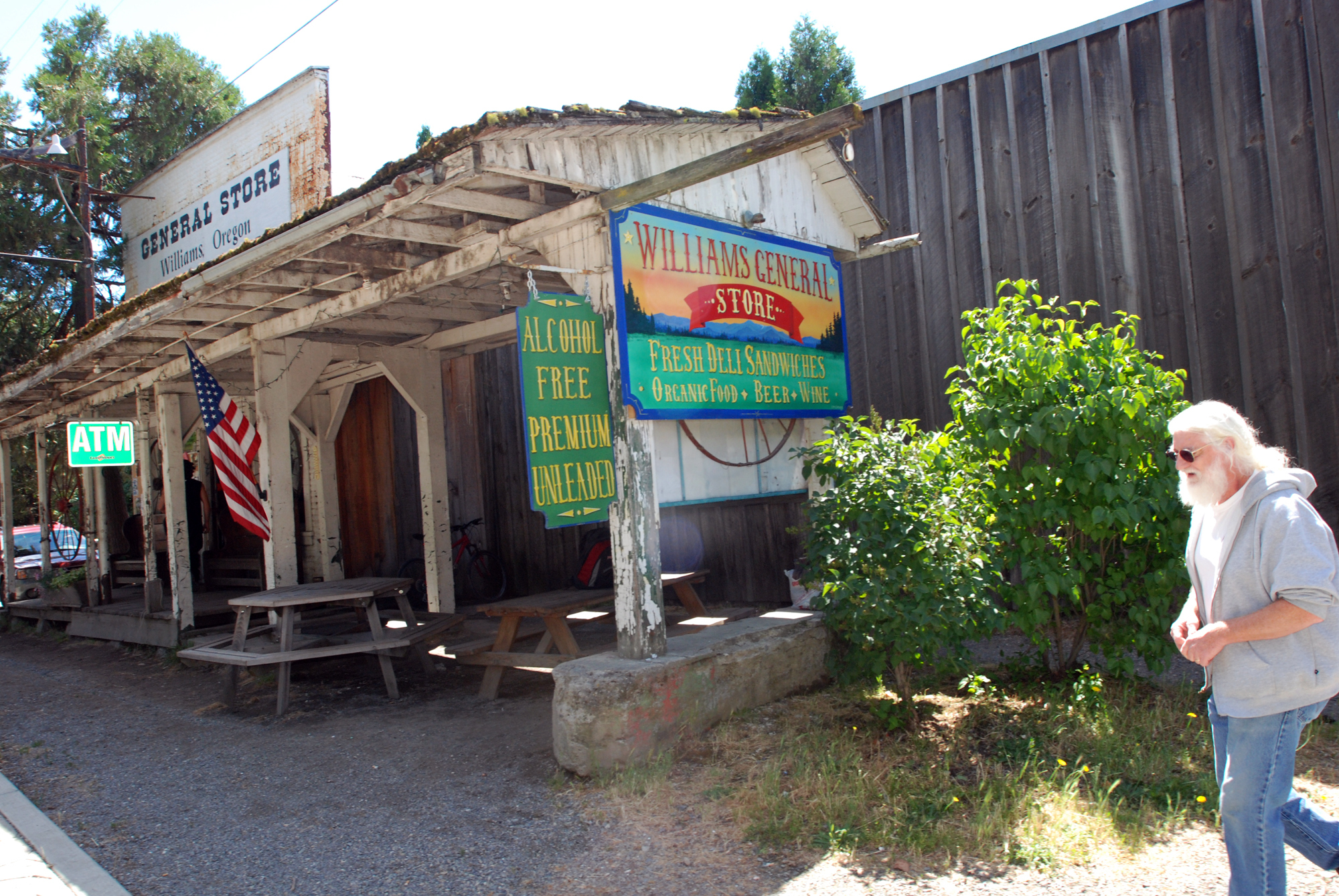 WILLIAMS, Ore. - Medical marijuana has taken root in this idyllic town like nowhere else in Oregon.

Nearly 20 percent of the population is registered to grow pot legally, and an untold number deals it illegally, creating stark contrasts in a bucolic burg where children still ring the bell to start the school day and pancake breakfasts draw a crowd at the local community center.

The Associated Press analyzed the locations of registered pot growers in Oregon based on their ZIP codes and found that Williams by far has the heaviest concentration. More than 400 of the town's 2000 residents are authorized by the state to grow up to six plants each.

The proliferation of pot became the talk of the town last summer when new Google Earth satellite images showed little green circles in neat rows all over the valley.

"My daughter showed me on her iPhone," said Neil Sinnott, owner of a local cafe. "She said, `Dad, look what your neighbors are doing."'

Six-foot-tall fences that screen marijuana gardens from public view have become so common that a local pastor uses them as landmarks for giving directions. One resident is trying to capitalize on the growing popularity of medical marijuana by starting a testing lab. A variety of marijuana grown here, called Williams Wonder, is cherished among pot connoisseurs.

Though big-city Portland has cafes where medical marijuana users smoke pot while singing karaoke, it is the rural communities of southwestern Oregon like Williams that have the highest percentages of folks smoking it, growing it and caring for others who use the drug.

Neighboring towns in Josephine County have high rates of pot growers similar to the 19.5 percent in Williams: O'Brien was at 15.2 percent; Selma at 10.5 percent; and Cave Junction at 9.9 percent, according to the AP analysis.

One ZIP code covering mostly rural residences shows 60 out of 80 residents with permits. The Oregon Health Authority will not provide any identifying information of pot growers and patients beyond their ZIP codes for patient confidentiality reasons. It will not provide information on ZIP codes with fewer than 50 cardholders, also for confidentiality reasons.

Medical marijuana has been growing in popularity statewide since becoming legal in 1999. The number of residents registered as patients, caregivers and growers this year hit 120,945, nearly four times the number five years ago. Few who ask to register are turned down. Only 950 applications — less than 1 percent — were terminated, denied or suspended.

Why has pot become so big in Williams? The reasons seem to be a combination of an ideal climate, remote and rural location and a willingness to live and let live.

Southwestern Oregon sits at the northern tip of the Emerald Triangle, one of the nation's best marijuana growing regions, which stretches into Northern California. Pot has been grown here since California hippies started moving in during the 1970s. When Oregon's medical marijuana law took effect in 1999, "a lot of those guys got their cards and came out of the woods and started doing it legally," said Keith Mansur, editor of the Oregon Cannabis Connection, a newspaper devoted to marijuana issues based in nearby Medford.

Laird Funk is a longtime activist who lost his job running the sewage treatment plant in nearby Grants Pass several years ago after testing positive for marijuana. Funk, now the chairman of the state medical marijuana advisory committee, says the weather is conducive to growing pot, but securing the crop can become complicated.

"It's not hard to do out here in the sunshine," he said. "Everybody does some variation of security. Some people use chain link. Some solid wood. Some people dress up like Vietnam and walk around with guns. But you could kill people like that, so I don't."

Williams took its name from an Indian fighter during the Gold Rush of the 1850s. After the gold played out, logging and dairy farms also waned. Now the valley is a mix of organic farmers, people cobbling together a living from odd jobs, mushroom picking, and California retirees and commuters.

Williams Community Church Pastor Rob Culton said he can feel community tensions rise at harvest time in the fall, when the threat increases of someone stealing a crop. But he does not condemn anyone. His wife took doctor-prescribed pills with a cannabis extract while having chemotherapy for cancer in the 1980s.

"I wouldn't want that to be something where a person would say, `I can't go to that church because I have a medical marijuana permit,"' he said.

A few long-time residents like Ben Watts remember when as many as four sawmills were running in Williams before they all shut down in the 1980s. A logger all his life, at 83 he still cuts firewood from the gold claim his grandfather worked. He is no fan of police, he says, but he would like for them to crack down on growers, particularly those selling pot illegally.

In 2009, a Williams couple growing for 11 patients was busted for having 220 pounds, far in excess of the 16.5 pounds allowed by law. Police said they learned of the site from a man stopped on Interstate 5, who said he was taking $9,100 there to buy marijuana. Because it was a first offense, the couple served just a month in jail after pleading no contest to delivery of drugs.

Just how much marijuana is being sold illegally by medical marijuana growers in Willliams, or anywhere in Oregon, is impossible to say. Police keep no statistics.

The prevalence of medical marijuana led Richard Reams, who teaches the art of growing trees into living sculptures, to open OregonGreen Lab. For $120 he will test a gram of marijuana and tell you the potency and active ingredients. One large grower has already signed up.

"I believe that in a short amount of time we will have legalized marijuana," Reams said. "The economic opportunities in that field could be large."

John Rickert worked for a health insurance company in San Diego before retiring to Williams. He regularly writes grants to fund programs for the elementary school.

Rickert said many people are just getting by economically, with most kids qualifying for free school lunches, but he sees a lot of people paying cash for dinners out and vacations when a credit card would be more convenient.

Still, Rickert said he's not bothered about the shift in the local economy from timber to pot.

"Everybody wants to cut the trees" to increase revenues for the county and schools, he said. "Forget cutting the trees. Let's legalize marijuana."