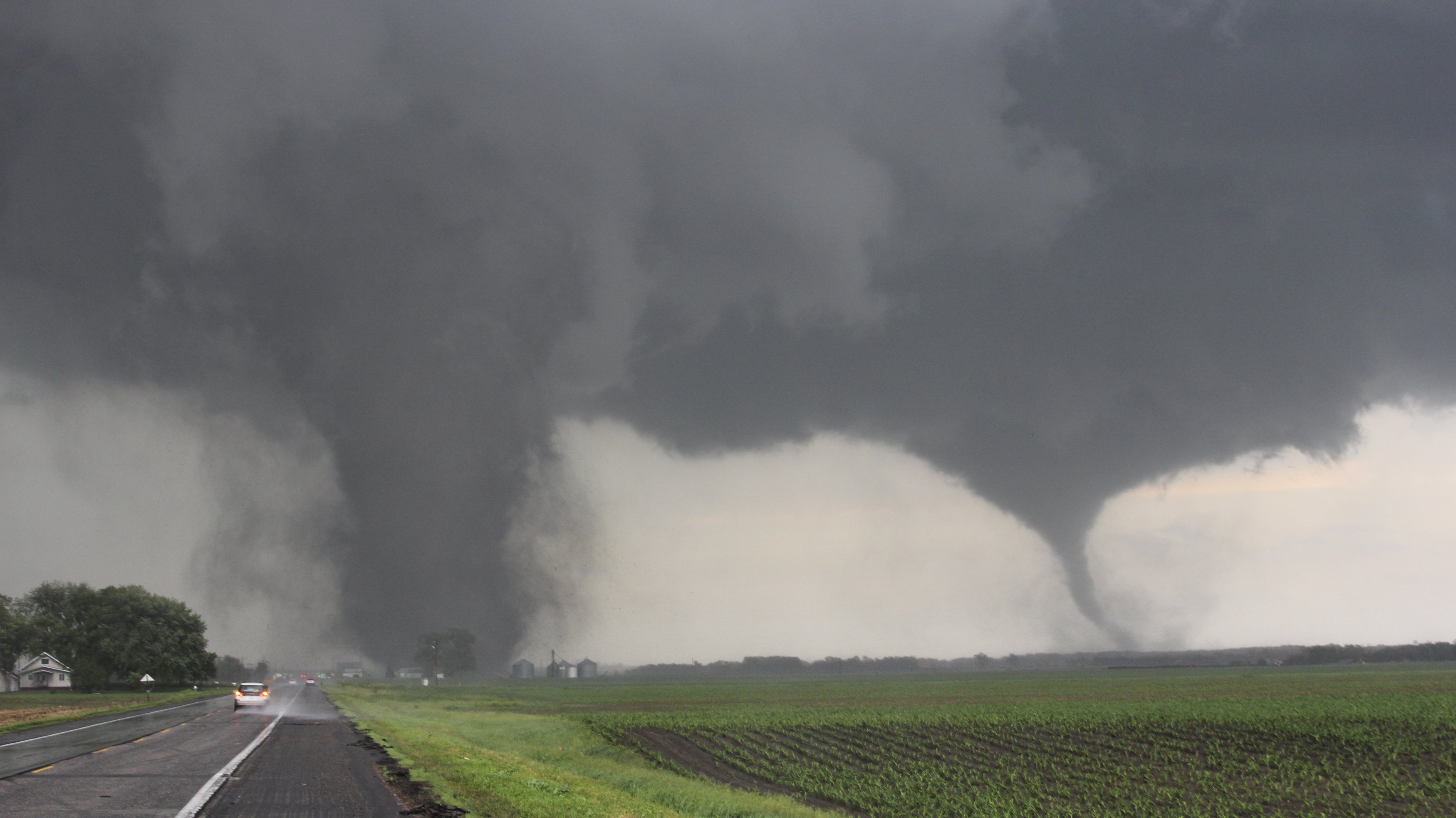 PILGER, Neb. -- As two giant tornadoes bore down on tiny Pilger, Nebraska, Trey Wisniewski heard the storm sirens, glanced out at the blackening sky and rushed with his wife into their basement.

"My wife was holding our animals, and I was holding on to my wife. We could feel the suction try to pull us out of there," he said Tuesday.

Suddenly, their house was gone, leaving them to dodge debris that rained down upon them. And then, the storm that hit so suddenly Monday afternoon was gone, allowing them to emerge and see what was left of their 350-person farming town.

They found much of the community was gone and learned two people had died.

"I've been telling people for many, many years, I've never seen a tornado in all my life and I grew up in northeast Nebraska. Wasn't a wish but I got to see something today I wish I never seen," Stanton County Sheriff Mike Unger told CBS News' Justin Pazera.

Nebraska Gov. Dave Heineman flew over Pilger in a helicopter Tuesday morning and then walked through the town, trailed by reporters.

"This is by far the worst thing I've ever seen as governor," Heineman said.

One of those killed was a 5-year-old girl, Calista Dixon, said Stanton County Sheriff Mike Unger said. The other was a motorist killed during the storm, David A. Herout, 74, of Clarkson, Nebraska. He died in Cuming County, a few miles from Pilger.

"I am amazed that ... out of all of this destruction only two people were killed," Wisniewski said.

At least 19 people were taken to hospitals.

Up to 75 percent of the buildings in Pilger were heavily damaged or destroyed. That included the grain co-op, bank, library, middle school, city offices and fire department.

The tornado destroyed much of the small downtown, leaving piles of bricks that had been storefronts in the street. Several grain bins on the south end of Main Street were swept away and others remained crumpled on the ground.

More than 300 cattle at a farm just north of Pilger were killed, CBS affiliate KMTV in Omaha reported. The owners of Herman Dinklage Inc. said the storm also destroyed their barn, equipment and house. They were in the process of moving the hundreds of surviving cattle to a safe place where they can have food and shelter.

"Rebuild...it's going to take a long time so...all of our machinery is in that tool shed that's all gone. We can't farm the rest of the year cause we got our planter, our combine, our bailer, everything's in there, so we can't feed the cattle now," said rancher David Dinklage.

From the street, residents walking through their town could peer directly into a mortuary and bank.

Homes south and west of downtown fared even worse, with most reduced to piles of debris or gone entirely.

While the governor said he was confident the community would rebuild, business owner Linda Oertwich wasn't so sure.

"Pilger's too small and the devastation in these homes will cost too much to rebuild," said Oertwich, who will decide whether to rebuild her Village Bar and Cafe after hearing from her insurance company.

The tornado swept away the house Larry Nelson, 73, had lived in for 23 years, leaving nothing but the cinderblock foundation. Because he didn't have a basement, Nelson rushed to a neighbor's house when sirens sounded.

"I'm grateful that I was over there," Nelson said, pointing to his neighbor's house.

The storm was part of a larger system that tracked across the nation's midsection Monday.

Pilger was hit by one of twin twisters, which roared for miles through northeast Nebraska. The tornadoes were of roughly equal size, about a mile apart. The northern twister, confirmed as at least an EF3 tornado, struck the town before the two merged, according to the National Weather Service.

The storm appears to have produced four tornadoes in all, said Van DeWald, lead meteorologist for the National Weather Service in Valley, Nebraska.

It was the size and intensity of the dual tornadoes that made them rare, said Nebraska State Climatologist Al Dutcher, noting that usually one tornado weakens and shrinks in such a situation.

Dutcher said a lack of thunderstorms helped increase the tornadoes' strength because they had no competition for wind and moisture in the atmosphere.

"It speaks wonders about the amount of instability that was in the atmosphere," Dutcher said. "This was a highly volatile situation where once something got going, it really got going."

Crews planned to examine the area Tuesday to determine the intensity of the twin tornadoes, said Barbara Mayes, a meteorologist with the National Weather Service in Valley, Nebraska.

Authorities said the first tornado touched down around 3:45 p.m. and downed several power lines before it leveled a farmhouse. The second tornado was spotted southwest of Pilger, according to the Stanton County Sheriff's Office. Shortly afterward, the town suffered a "direct hit" that leveled several buildings, including the Fire Department building.

Heineman declared a state of emergency, and the National Guard was preparing to assist local emergency responders and help with the cleanup. A shelter for displaced residents was established at Wisner-Pilger Jr.-Sr. High School in nearby Wisner.

Tornadoes also caused damage in Cuming and Wayne counties, the Nebraska Emergency Management Agency said in a news release. Meteorologists also tracked a reported tornado near the town of Burwell, in central Nebraska.