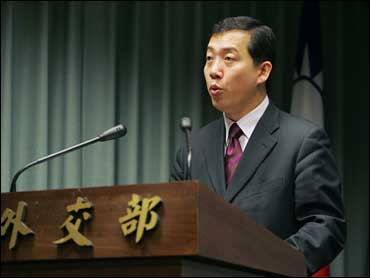 This tiny Caribbean island may have thought it was no big deal when it severed its 10-year relations with China and restored ties on Tuesday with rival Taiwan. Wrong.

China, which built a stadium and was finishing a psychiatric hospital here and considers Taiwan a renegade province, called the move a "brutal interference in China's internal affairs." In short order, one of the world's smallest nations has now made an enemy out of one of the largest.

Both Taiwan and China, which for more than 20 years have battled for diplomatic allies, brought out their big guns to curry favor with St. Lucia, a verdant, mountainous 240-square-mile island that is home to 168,000 people.

"We have been very careful about making this decision, and now that we have taken it, we do not expect the Chinese will love us any more for it," Bousquet said. "But we expect that they will conduct themselves in a manner that is acceptable to our government."

Bousquet had indicated that any decision would be based on which suitor could offer a better deal to St. Lucia, where some 20 percent of the population lives in poverty.

As he put it in April: "Support those who give you the most."

Nationalistic pride in St. Lucia, which won independence from Britain in 1979, also played into the equation.

"St. Lucia did not win its sovereignty from one power to be now dictated to by another as to who its friends should be," the weekly St. Lucia Mirror said in an editorial. It added that Beijing's One China policy cannot "be legally or diplomatically thrust on St. Lucia, as though we, too, were a colony of China."

St. Lucia indicated last week that if it resumed relations with Taiwan, it would still want to be friends with China. The Chinese Embassy sent a rebuff on Friday, saying China does not accept "double recognition."

China, which had established relations with St. Lucia 10 years ago, was apoplectic at Tuesday's reversal.

Shelley Rigger, a professor of East Asian politics at Davidson College in North Carolina, said the stakes are higher for Taiwan, but both China and Taiwan play fiercely.

"Every diplomatic setback and step forward for Taiwan is important," said Rigger.

He said China's foreign policy is based on the idea that "there's no space for Taiwan in the world."

That little St. Lucia has angered the colossus recalls the satirical movie and novel "The Mouse That Roared" — about a tiny country that tries to invade the U.S. so it can lose and accept foreign aid.

Only St. Lucia doesn't even have an army.

It is a given that the planned cultural center will not be built by China. And work has suddenly slowed on the nearly finished 104-bed psychiatric hospital.

Ties with China did not improve the lot of many St. Lucians. The last 10 years have seen a handful of Chinese businesses open on the island, mainly restaurants and shops. But St. Lucia has not seen the predicted influx of Chinese tourists.

For its part, Taiwan propagated new strains of fruits and vegetables and introduced agricultural techniques during its time here.

St. Lucia maintained diplomatic relations with Taiwan for 13 years under Prime Minister John Compton. His party was defeated in 1996, and the following year St. Lucia recognized China. Compton's return to power in December's elections also marked the beginning of Taiwan's comeback, even though China pledged more money and technical assistance.

St. Lucia's recognition of Taiwan is the first win for Taiwan in some time in its diplomatic rivalry with China. In 1969, Taiwan had full relations with 67 countries, including the U.S. and much of Western Europe. Until Tuesday, that number had dwindled to just 24.