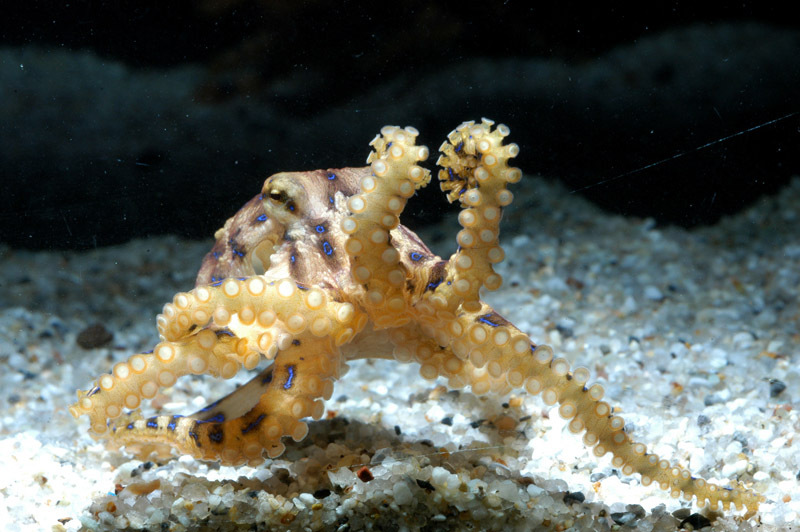 ENOSHIMA, Japan As snack bars start to reopen and windsurfers drift back to this popular beach town south of Tokyo, few denizens are aware that they're sharing real estate with one of the most lethal sea creatures known to man.

Enoshima is at the northern edge of habitat for the notorious blue-ringed octopus. Sightings have spiked in recent years, and armchair scientists have been quick to blame hotter ocean currents for unleashing a plague of the warm water-loving, eight-tentacled poison darts.

The Shizuoka Prefecture Fisheries Technology Center has done an informal survey of online sightings by recreational divers around the Izu Peninsula, further south, and says reports in that diver's paradise alone jumped from less than 40 during 2006, to about 120 per year starting in 2007.

A curious fisherman scooped up one of the tiny creatures in May and brought it here, to the Enoshima Aquarium, Japan's oldest collection of marine life. Along with the Humboldt penguins, lava-lamp-like jellyfish displays and dolphins, the blue-ringed octopus, known here as hyomondako, or "leopard-print octopus," has become one of the aquarium's most popular attractions.

"I've never seen such a tiny octopus," visitor Yoshihito Seino said as he peered through the glass at the creature, compact enough to fit in a palm, as it swam around its tank.

"What a cool color!" admired another visitor, Madoka Tokeshi, as she snapped pictures.

But despite the scary headlines the creature's apparent encroachment has generated here, the Enoshima Aquarium's chief aquarist, Tadao Sakiyama, scoffs at notions of an impending octo-lypse.

"Yes, it's true that sightings are up," he said. "But more people are diving for pleasure these days. And more people are posting on the Internet. So this doesn't necessarily mean there are more blue-ringed octopuses -- only that reporting has gotten better."

Sakiyama and his staff, who dive in the reefs off nearby Enoshima Island, say they frequently spot the shy creature. As for getting up close and personal with the legendary mini-monster, Sakiyama is nonchalant. "As long as you don't touch them," he said, "you absolutely won't get bitten."

Even outstretched, the octopus measures just four to six inches in length. It gets its English name from its unusual coloring -- wavy rings that deepen into an angry, midnight blue, when the octopus is provoked.

Its most defining feature, however, is its unusually powerful poison, tetrodotoxin. It's the same substance that makes "fugu," or puffer fish -- which is a delicacy here -- fatal if served whole. (Fugu is served only by licensed chefs who are trained to remove the dangerous organs.)

A single milligram of blue-ringed octopus venom, which attacks the nervous system, can cause respiratory failure within minutes. There are many reports of blue octopus bites in Australia, some of them fatal.

Still, in Japan, such dangerous encounters are rare. Shizuoka Prefecture has reported just a single blue octopus victim, who survived.

All octopuses -- even the edible variety -- are equipped with venom to immobilize their prey, Sakiyama noted, although others are benign. "You wouldn't want to get bitten by one. But it would be no worse than a sting."

Much is unknown about the little octopus, largely overlooked by marine biologists in Japan because its size makes it difficult to observe, and because it has no value as a food species. Scientists believe it breeds between April and June and has a lifespan of one year, its existence threatened only by cold snaps and its foe, the Moray eel.

While biologists have paid it short shrift, the tiny creature has gotten plenty of play from western fiction and screenplay writers. It certainly seems like a beast born for evil intent -- the octopus' bite can go undetected until its victim feels nauseous. Even more sinister, victims remain alert but unable to speak as paralysis sets in -- and there is no antidote, although many have been saved through resuscitation.

In the 1983 James Bond flick "Octopussy," the cephalopod appears front and center, tattooed onto the Bond girls, and flaunted as an icon on their silk robes. In Michael Crichton's novel "State of Fear," a radical environmentalist wields blue octopus venom to assassinate his enemies. Blue octopus poison has even served as a plotline in an episode of the police procedural NCIS.