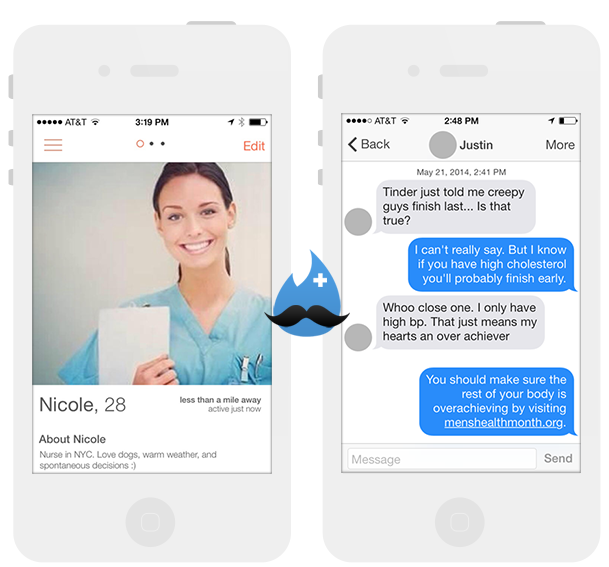 "Nurse Nicole" may not be the partner that men on Tinder were expecting, but she's willing to endure some awful pickup lines -- all in the name of raising awareness about men's health.

"Nurse Nicole" is part of a social media campaign called Matches for Men's Health, which was launched two weeks ago by advertising students Vince Mak and Colby Spear in conjunction with Men's Health Month in June.

"Our goal is create a dialogue about men's health," Spear told CBS News.

Compared to men, women are twice as likely to visit their doctor for annual checkup, according to the Centers for Disease Control and Prevention.

So Mak and Spear decided to go where a captive male audience is -- the dating app Tinder -- to raise awareness about preventable health issues and annual checkups. "Using Tinder is much more unexpected," said Mak.

Mak and Spear created the "Nurse Nicole" Tinder profile and started getting matches right away - and hopefully "saving lives with the right swipe."

Tinder users swipe through several photo profiles to find someone who catches their eye, and they swipe to the right to "like" them.

"Nurse Nicole," a profile actually controlled by Mak and Spear, then exchanges messages with Tinder users and then encourages them to take note of their health.

One recent exchange between "Nurse Nicole" and a Tinder user named Justin went like this:

Nurse Nicole: I can't really say. But I know if you have high cholesterol you'll probably finish early.

Justin: Whoo close one. I only have high bp. That just means my hearts an over achiever

Nurse Nicole: You should make sure the rest of your body is overachieving by visiting menshealthmonth.org.

While Spear said there's no guarantee that their Tinder campaign would save lives, if it at least gets men thinking about their health, then it was worth it.

"Lots of guys are reluctant to take their health seriously," Spear said.