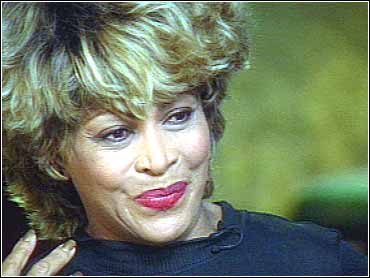 Mike Wallace catches up with a musical legend once again as she belts out the last notes of a long and storied career. Now in her sixties, Turner just last year finished her farewell tour.

Tina Turner is more than just a rock 'n' roll stunner. Beyond her remarkable talent, her vitality, her prowess and power on stage, she is a woman of courage and substance offstage. This was evident when Wallace first profiled her in 1996 when she was 56 years old.

Turner has lived in Europe for more than a decade. In Europe, she became a bigger star than she ever was in the United States. "No one in America knows that," she said. "Success in America - what I find with my homeland, nothing lasts very long. Europe is different," Turner explained. "You're right there with them until you come back."

Her love affair with Europe was only the latest chapter of a remarkable life. Born Annie Mae Bullock in Nutbush, Tenn., she picked cotton as a child and planned on becoming a nurse when, at 18, St. Louis musician Ike Turner discovered her unique voice. He hired her, married her and renamed her Tina Turner. They became the Ike and Tina Turner revue.

She finally left him in 1976, struggled on the lounge circuit for years, until 1984, when her comeback album, Private Dancer, sold 10 million copies and garnered four Grammy awards. And then her very candid autobiography detailed the years of physical abuse that she suffered from Ike, abuse graphically documented in the 1993 film What's Love Got to Do with It.

The violent history with Ike left hidden physical scars long after their divorce. "I have had, basically, my face bashed in, and I never did anything about it," she said. "I just went through my life because I was all right. And then I started to have problems traveling with my sinuses," Turner explained.

"So when they went in to correct it, I ended up with...another nose," she added.

Her only serious relationship since Ike Turner has been with Erwin Bach, a German-born record company executive 16 years her junior. At the time of the 1996 interview, they had lived together for 10 years.

He claimed Turner is the boss. And with that comes all the toys she wanted. She had a customized Lamborghini jeep and, when on tour, a chartered private jet. Her home in the south of France had breathtaking views of the French Riviera, a spectacular pool and all the creature comforts she needed. When asked if she deserved all this luxury, Turner responded, "I deserve more."

Hidden away on the second floor is a Buddhist shrine. This born-Baptist credits Buddhism with giving her the strength that she needed to get through the rough times. And she continued to chant daily.

But Turner was able to imagine an end to her performing career. "I could say it now, but I don't think it's time," she said. "Most people think that I could not retire right now. I could. I'm pleased with my life, with the journey. I'm perfectly fine now if I never went on stage again."

Turner is 60 years old now and approaching the end of another world tour she has officially announced will be her last. "This time, I know it's a closure. I can feel it," says Turner.

The beginning of her last time around was her appearance on the VH1 program "Diva's '99." She was set to perform her trademark version of "Proud Mary" with another rock 'n' roll legend, Elton John, a long-time friend with whom she was planning an elaborate tour. That plan, according to Turner, died at the show's rehearsal.

"I made a mistake when I needed to show him how to play 'Proud Mary.' The mistake is you don't show Elton John how to play his piano."

John's reaction, according to Turner, was anything but subtle. "He just went into a rage, which he apologized for later. He said it was wrong."

She canceled the tour and the multimillion-dollar payday that would have come with it. Instead, she recorded a new album, performed at the Super Bowl and then set off on her farewell tour. It may be her last but she treats it as though it is her first.

"It's a play. It's an act. For the moment, it's a small movie, so to speak," she says, describing her latest tour. "That's why I like all of the stuff and the action and the playoff between me and the girls. It's life on that stage for that two hours."

"And sometimes the music is loud, and sometimes it's not," she said. "I need that on stage. I need a burst of life. That's entertainment for me."

When the tour winds up, Turner says, she looks forward to settling down quietly with Bach in Europe. She will have the satisfaction of contemplating just how far she has come from Nutbush, Tenn., and the old days when American audiences were just not all that interested in the ex-wife of Ike Turner.

Turner believes it is easier for people of color to live in Europe than in the United States but she says she doesn't spend much time on the issue. "I've never bothered about my color. I never had that thing about being black," she explains. "If the whole world was like tat, maybe there would be more harmony and love. Maybe. I don't have a problem with being black in a white country or being with my people."

She says that only now has she become comfortable enough with her career to walk away without a single regret. "It's almost like the war is over. It's all finished. You've arrived. You got there."

The IMF Report | Sunday on 60 Minutes
Thanks for reading CBS NEWS.
Create your free account or log in
for more features.
View CBS News In
CBS News App Open
Chrome Safari Continue
Be the first to know
Get browser notifications for breaking news, live events, and exclusive reporting.