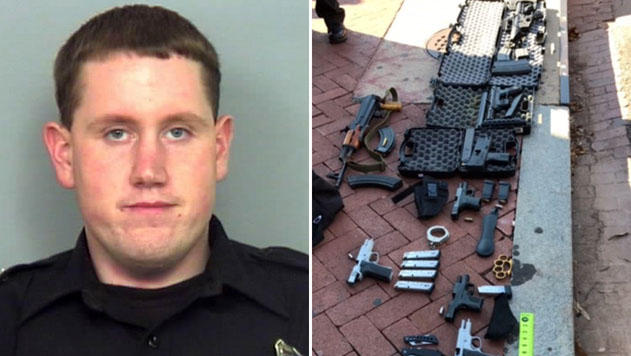 WASHINGTON -- Court documents reveal that the man arrested near the White House is a former Memphis police officer who had an arsenal of weapons in his car and believed the CIA had implanted a chip in his head.

The man, 37-year-old Timothy J. Bates of Collierville, Tennessee, was arrested early Sunday morning near the White House. He made his first court appearance Monday on charges of illegally carrying a rifle or shotgun.

According to court documents, Bates was approached by uniformed members of the Secret Service as he appeared to be urinating. He told the officers that he was trying to reach Defense Secretary James Mattis or the director of the National Security Agency, Adm. Mike Rogers, "for advice on missing paychecks and how to get the dog chip out of my head," the police report said.

Bates gave officers permission to search his illegally parked car, and they discovered nine firearms including a Bushmaster assault rifle and a loaded AK-47. Investigators also seized "multiple rounds" of ammunition including numerous extended magazines, a folding knife, a blackjack and brass knuckles.

A spokesperson for the Memphis Police Department confirmed to CBS affiliate WREG that Bates was an officer from 2000 until 2013, when he retired. The department did not comment further.

The court documents say Bates was "involuntarily committed for mental health reasons in Tennessee" in February of 2017.

He was reportedly transported to a Washington hospital for observation before being booked on criminal charges.