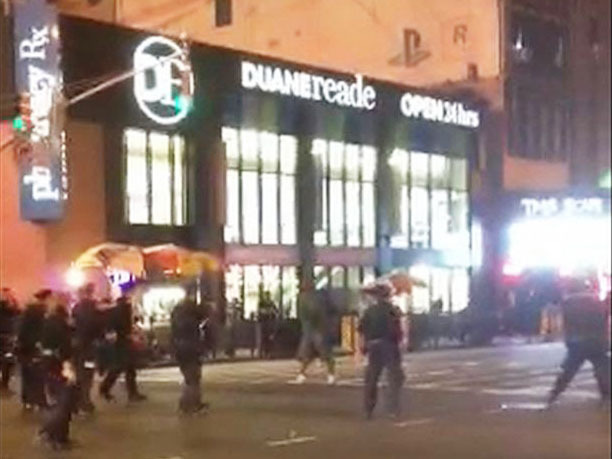 (CBS) NEW YORK - To former New York City police officer Eugene O'Donnell, the shooting that left two bystanders wounded in Times Square on Saturday night is yet another illustration of the "gigantic" problem police have when dealing with citizens with mental illness.

According to The New York Times, the New York City Police Department has said that 35-year-old Glenn Broadnax told police he was trying to commit suicide by walking in and out of traffic in one of the busiest intersections in the city - 42nd street and 8th Avenue. The Times reports that police say officers opened fire after Broadnax allegedly reached into his pocket and withdrew his hand, pointing it toward cops as if it were a gun. But instead of hitting Broadnax, the bullets struck two bystanders, both of whom survived.

Whether Broadnax was actually trying to commit "suicide by cop" or simply acting erratically we don't know. But his behavior - and the NYPD response - highlights the fact that when police and the mentally ill come face to face, the situation can quickly become deadly. Although we don't know exactly how many people are killed by police each year in the United States (the best estimates are between 350-400), David Klinger, a former Los Angeles police officer and author of "Into the Kill Zone: A Cop's Eye View of Deadly Force," says that the mentally ill comprise a "non-trivial chunk" of that number.

Indeed, according to a 2012 investigation by Maine's Portland Press-Herald, 42 percent of the people shot by police in Maine - and 58 percent of those who died - were mentally ill.

But, says ex-NYPD officer O'Donnell, police officers in New York and across the country get only limited training in how to de-escalate situations involving the mentally ill, who frighten police because they can behave erratically.

"The problem is fear of the unknown," says O'Donnell, who is now a professor at New York's John Jay College of Criminal Justice.

Across the country, a small but growing number of police departments have created designated "Crisis Intervention Teams" (known as CIT) which are made up of officers who have undergone intensive training in understanding the mentally ill, as well as representatives from community groups and hospitals.

The NYPD has historically rejected bringing CIT to New York, but just one day before the Times Square shooting, a group of New Yorkers - including representatives from the National Alliance for the Mentally Ill (NAMI) - spoke with Major Sam Cochran, the man who created CIT in Memphis nearly 20 years ago, about pushing the program in the city.

According to Carla Rabinowitz, the community organizer of Community Access, a group that assists New Yorkers with mental illness, the NYPD receives more than 100,000 calls about "emotionally disturbed persons" (EDP) each year. And yet, she says, "they don't have the training on de-escalation" and "treat the mental health recipients poorly."

"It's not malicious," says Rabinowitz. "It's that they lack the applicable training."

To try and solve this problem, Rabinowitz and others advocates for the mentally ill have drafted a proposal for the City Council and are planning a press conference for Sept. 25 to formally ask the mayor to bring Crisis Intervention Teams to the city.

The NYPD did not respond to Crimesider's questions about the Times Square shooting by press time.

John Jay's O'Donnell tells Crimesider that the Times Square shooting is the perfect opportunity for the NYPD to examine how it trains officers on both deadly force and dealing with the mentally ill.

"It shouldn't take the next occurrence where some tourist from Iowa is lying dead in the street for us to look at policy," he says.