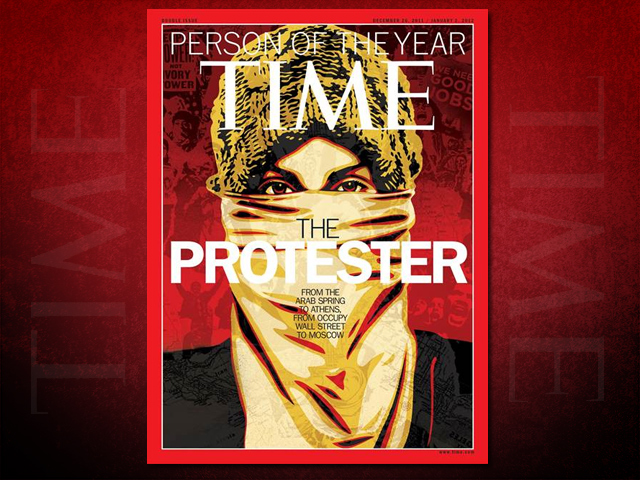 The news magazine cited dissent across the Middle East that has spread to Europe and the United States and said these protesters are reshaping global politics.

Time's "Person of the Year" is the person or thing that the magazine feels has most influenced the culture and the news during the past year, for good or for ill.

The selection was announced Wednesday on NBC's "The Today Show."

Time said it is recognizing protesters because they are "redefining people power" around the world. The chain of protests that reshaped North Africa and the Middle East began last December in Tunisia, when street vendor Mohamed Bouazizi set himself on fire to protest the country's soaring unemployment, high food prices and political oppression. The wave of demonstrations that followed forced President Zine El Abidine Ben Ali from power the next month.

Tunisia's unrest was quickly followed by protests in Egypt against longtime ruler Hosni Mubarak. Tens of thousands of protesters flooded Cairo's Tahrir Square for weeks, enduring the government's sometimes bloody crackdown, before Mubarak stepped down. While there have been recent protests against the ruling military council for a perceived slow pace of political reforms, new parliamentary elections are currently underway.

In neighboring Libya, protests against the rule of dictator Muammar Qaddafi morphed into a full-fledged military revolution, with rebel forces sweeping into Tripoli and forcing Qaddafi to flee after months of clashes with loyalist troops across the country. After weeks in hiding, Qaddafi was found and killed in his hometown of Sirte.

Not all protests were regime-toppling, however. Syria's violent crackdown on pro-democracy protests has been condemned internationally, but President Bashar al-Assad has remained defiant in the face of calls for him to step aside.

And protests also swept across the U.S., with demonstrations against economic inequality and perceived corporate greed taking place in several cities over the last three months under the moniker "Occupy Wall Street."