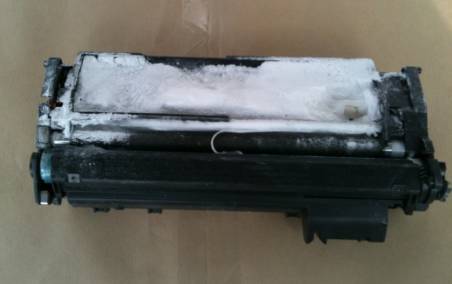 Sept. 3, 2010: UPS cargo plane crashes at an air force base shortly after take-off from Dubai airport, killing two crewmembers on board. Reports said a fire had broken out in the plane just after it took off from Dubai international airport.

Sept. 21, 2010: AQAP kidnap senior Yemeni security officer in Saada, and request the release of Fayfi in exchange for the Yemeni officer.

Sept. 2010: U.S. intelligence officials are warned by the Saudis that terrorists were planning to mail chemical and biological materials, as part of an attack on America and other Western countries using the mail.

Sept 23, 2010: The alert was published in a bulletin from the Homeland Security Department

Oct. 28, 2010: Leicestershire police called to East Midlands airport at 3:28 a.m. BST to check out a suspicious package that was shipped aboard UPS plane.

The parcel was a printer containing an ink cartridge with protruding wires, a circuit board and partly covered in a white powder. The parcel turned out to contain explosives.

U.K. inform counter-terrorism officials in the U.S. At 10:35 p.m. EST time, President Obama was informed of the find.

NYPD seize a UPS truck known to have a package from Yemen on board. Truck was later cleared.

Report says anti-terror authorities in the U.S. and the U.K. examining suspected explosive packages addressed to Chicago-area synagogues and packed aboard cargo jets.

Pictures released of the suspect package intercepted in the U.K., show a printer's ink cartridge containing white powder and a mobile phone circuit board. The white substance is confirmed to be PETN.

Second suspect package sent from the same source in Yemen via FedEx, discovered at FedEx warehouse at Dubai airport. Turned out to be identical to that intercepted in the U.K.

President Obama makes a TV address, says that both packages did contain explosives -- that they were essentially bombs -- and that they represented a "credible terrorist threat against our country".

John Brennan, the President's assistant for homeland security and counter-terrorism says the U.S. was acting on specific intelligence that had identified a parcel shipped on a UPS flight via the East Midlands

"The investigation into the suspicious packages that came from Yemen has shown that (one of them included) a computer printer whose ink contained explosive material. The device was prepared in a professional manner and equipped with an electrical circuit linked to a mobile telephone (SIM) card concealed in the printer. The manner in which this device was prepared bears the hallmarks of those used by terrorist organizations like al Qaeda."

Yemeni authorities say that are inspecting a number of suspicious packages, made some arrests in relation to the plot.

British Home Secretary Theresa May says U.S.-bound package from Yemen was a "viable" bomb that could've brought down an aircraft if it had been triggered.

U.K. forensic experts say one of the two bombs was linked to a mobile phone, the other was attached to a timer, and were designed to explode in mid-air.