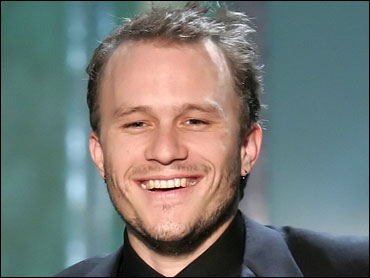 Joins the Globe Shakespeare Company in Sydney and acts in independent films.

1996:
Plays a cyclist hoping to land a spot on an Olympic team in the TV show "Sweat."

July 1997:
Stars as a Celtic warrior prince in the TV series "Roar."

Spring 1998:
Cast opposite Julia Stiles in "10 Things I Hate About You," an updated "The Taming of the Shrew" in a high-school setting. Then chooses not to work for over a year because he doesn't want to do another movie about teens.

Spring 1999:
Cast in the Revolutionary War drama "The Patriot," playing the son of Mel Gibson's character.

April 2004:
Works on "The Lords of Dogtown," a fictionalized version of a cult classic 2001 skateboarding documentary, which is filmed in the Los Angeles area.
(Photo: AP/Columbia/TriStar Pictures)

June 2005:
Moves to the New York City borough of Brooklyn. His girlfriend, Michelle Williams, is expecting the couple's first child. They met while filming "Brokeback Mountain"; she plays his wife in the movie.

Oct. 28, 2005:
Matilda Rose, his daughter with Williams, is born. Regarding a possible wedding, he tells Canada's National Post in 2005: "Look, I wouldn't rule it out. But if I was going to marry, the media won't know about it."

September 2007:
Breaks up with Williams.

Nov. 21, 2007:
"I'm Not There" opens. Ledger is one of the actors playing Bob Dylan, along with Cate Blanchett. Williams also stars.
(Photo: AP)

Ledger's body is found in his Manhattan apartment. He was 28.

Feb. 6, 2008:
The New York City medical examiner said Heath Ledger died of an accidental overdose of painkillers, sleeping pills, anti-anxiety medication and other prescription drugs. The cause of death was "acute intoxication by the combined effects of oxycodone, hydrocodone, diazepam, temazepam, alprazolam and doxylamine," a spokeswoman said in a statement.

Feb. 9, 2008:
Following his cremation, a memorial service was held in Perth. A program handed out to mourners read: "This room is filled with the love we all felt for a great friend who will be missed by all of us. We want to thank those of you who took care of him and participated in his beautiful life."
Later, family and friends said a final farewell with a sunset dip in the ocean.