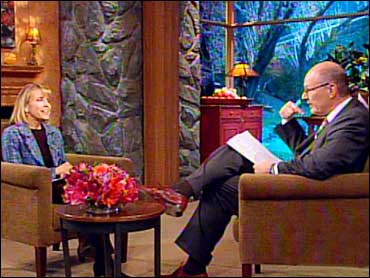 Both parents normally find it easy to hug and show affection to their children when they are little, but it's not so easy when they get older. According to one new study, teenagers who had better relationships with their fathers had fewer depressive symptoms.

Psychologist Robin Goodman tells The Early Show co-anchor Harry Smith what was interesting about this study is that it did not look at parents as a unit, but separated the fathers from the mothers.

The researchers asked 359,000 teenagers to evaluate the quality of their relationships with their mother and father when they were 14 and 15 years old in 1998/99 and then two years later when the same teens were 16 and 17 years old.

Goodman says, "The study basically showed that mothers and fathers are both important to kids, but one of the interesting things was that kids/teens perceive their relationship with mothers as pretty consistent in terms of feelings of closeness, affection and understanding."

The participants also reported on their relationship with their peers at both periods and even though at this age, teens would rather be with their friends, Goodman says parenting should not stop.

She says researchers "found out that peers and friendships were important, but that parents are still important, and actually, if the relationship got better especially with the dad, it helped."

According to the study, teenagers "who reported higher levels of closeness, affection and understanding from their mothers and fathers had lower depressive symptoms scores at both times in their lives."

Boys reported having closer relationships than girls with their fathers during the teenage years. The study also found girls are more prone to depression than boys. So it is very important for fathers to be particularly involved with their girls.

Goodman explains that although teens may roll their eyes in response to their parents and argue or disagree with them and label parents as too strict, they need to know what the limits are. "Kids want to hear about their parents' values and know what their parents think. This is one of the ways kids form their own opinions," she says.

So what should a parent do to encourage that closeness?

Goodman says, "In terms of kids and depression and engagement, it's hard to know which comes first, the chicken or the egg. If you see a withdrawn, 'I don't care' teen, don't pass it off as teenage behavior. It's a kind of warning sign. The reason they are withdrawn is because they are not feeling connected or that they are depressed. Either way, it's a red flag for parents to stay involved."

Goodman notes parents will tell you that they learn the most about what is going on in their teens' lives when they are driving. You can get to know their friends if they are in the car, too. Going out and shopping together or walking together is another way. She says that dads might feel like all they are to their teen is an ATM machine. If so, they should go shopping with their daughter.

Goodman says that fathers will say they don't understand girls and leave it at that. "It's not fair," she says. "That means you have just given up on half of the world. Try harder."

Here are some tips on how fathers can be more involved with their daughters:

The study also found that those who reported having good relationships with their peers were less likely to be depressed.

"Kids and teens need to be 'connected' with people who care about them," Goodman says. "They have to feel like they have an interpersonal connection with someone, a coach, a teacher, and it's great if it's their parents."