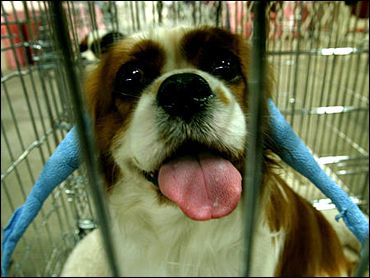 When it comes to picking America's top dog this week, there are plenty of candidates — a German shepherd with pedigree, a standard poodle with experience and an Ibizan hound with the playful name of Playmate of the Year.

Still, when it comes time to choose best in show at Westminster, there's usually one place to look first: a terrier.

So make Coco, a sprightly Norfolk terrier, the early favorite going into the nation's prestigious dog show. Judging was to begin Monday morning, with the silver bowl to be presented Tuesday night.

"Far and away, she's the No. 1 show dog in the country," said David Frei, the longtime voice of USA Network's coverage of the event. "No one even close."

Officially known as champion Cracknor Cause Celebre, the little 5-year-old from England put on the dog — so to speak — in recent months. She's won 23 best in show titles since last September, taking the widely televised AKC/Eukanuba event in Long Beach, California.

Coco already had won another 23 titles in the previous eight months before that stretch, and her list of victories was impressive. And there's this bit of history: of the 96 best in show titles awarded at Westminster, 43 have gone to some sort of terrier, most recently last year by a Kerry blue terrier called Mick.

"She's a wonderful dog," praised David Helming, who owns a Newfoundland named Josh that also hopes to contend for the title.

That said, Coco is no sure thing. Frei quickly points out that in the last 15 years, the top-rated dog has won only about half the time.

"You're judging the dog on the day," he said, echoing a familiar refrain among show officials.

And of the 2,624 entries, including some that started arriving at Madison Square Garden on Friday night, plenty are hoping to have their day. The list includes Josh, a slobbering Newf favored by big-dog fanciers.

If Josh wins, that would be just fine for a lot of people who have been too accustomed to watching prissy pooches win at Westminster.

"I'm not a little-dog fan," declared New York Yankees pitcher Mike Mussina, who co-owned an Irish setter that made it to Madison Square Garden in 2002. "To me, the All-American dog is one that is running around in the back yard, playing with the kids.

"If you want to have people watch the shows, you need a 60-pound or 70-pound dog to win once in a while," he said. "I'm not saying every year. But once in a while. You think if the Yankees won the World Series every year that people would watch baseball? That's why you need the Marlins to win in an upset, or the Angels to win in the first round or for Arizona to beat them in the bottom of the ninth inning."

The show creates quite a stir in a city already full of attractions.

The Empire State Building will be bathed in purple and gold lights — Westminster colors — during the event. A crowd of up to 10,000 could turn out to see the winner chosen.

The USA Network drew about 4.6 million people per night for last year's telecast. And dog shows seem to be gaining in popularity — on Thanksgiving Day, about 20.6 million viewers tuned into NBC to watch the National Dog Show when it went up against the Green Bay-Detroit NFL game.

There will be 162 breeds and varieties this time, including three newcomers — Nova Scotia tolling retrievers, German pinschers and toy fox terriers. There also will be Parson Russell terriers — a cat fight, so to speak, broke out between the long-legged and short-legged Jack Russell enthusiasts and thus they're now entered under the different name.

Along with the crowd-pleasing Josh, there's a personable Pekingese named Les. An Ibizan hound that has a symbol like the Playboy bunny on its back also returns, as does a standard poodle. Looking to make the final seven for the first time is Genuine Risk, a daughter of the famed German shepherd Dallas.

On Tuesday night around 11 p.m., judge Burton Yamada will point to the one dog that he sees as the best of all. Yamada is the same judge who selected Josh as the top working dog last year.

"It's hard not to think about that," Helming said. "But just to get to the elite seven, it's pretty special."