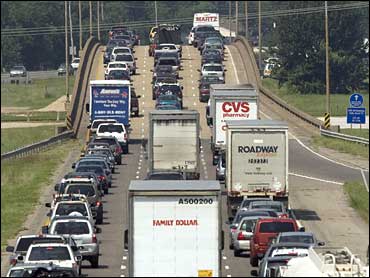 Christopher Lochhead is a former technology executive who now works as a strategy advisor.

It is early Monday morning. You're late. Racing to work. Testing the edge of the speed limit. Exhibiting your prowess as the next Mario Andretti. Then, you see it. Up a head. A slow car in the passing lane. Actually driving below the speed limit. Only the slow-poke doesn't call it the passing lane. Because that's not what it's called in America. Because the federal and state legislators got it wrong (more on this coming).

For lollygaggers in the passing lane, it's just the left lane. A regular cruising lane. A place where they can relax. Talk on the phone, text message their friends, shave, and paint their toe nails. A lane where they can do all sorts of things, except for drive fast. These people are passing lane hijackers. They are morally bankrupt, evil doing, congestion-creating...yes, criminals!

And it gets worse. Passing lane hijackers don't move when you pull up behind them. They just sit there. Picking their hairy noses, drinking their lattes, wasting our time. They pay no attention to the fact that you are ridding their bumper, flashing your headlights and honking your horn. These acceleration robbers just won't move. They force us to weave back and forth between right lanes and left lanes, like a trapped pin-ball.

To make matters worse, as you flip them the bird while passing, they stare at you with that innocent, "Me? What did I do?" face.

Passing lane hijackers are creating massive problems for America. The problem is forcing some (namely, me and a group of my friends) to seriously consider forming a political action lobby group. Our tentative name is `Free Up Our Freeways Forever,' aka, the F.U.O.F.F. Our agenda is simple and clear: We believe that left lane congestion is a problem we can not hand down to our grandchildren. American tolerance for passing lane hijackers can not stand. We need a public passing lane option that we can believe in.

First, passing lane procrastinators, cause many of us to be late for work. Creating a drain on the economy and causing hourly workers to get paid less. Second, they are a major cause of accidents, by forcing speeders to jam on their breaks, risking precious American lives. And third, they are major creators of stress, road rage, and spontaneous forehead vein explosions.

Just as in heath care, many other countries are ahead of the U.S. when it comes to speeders' rights. Posted on some Italian highways are three different speed limits. This makes it clear that the left lane is for people who are moving. Trucks are never allowed in the passing lane. In Germany or Portugal, Lord help you if you're dawdling in the passing lane. Within seconds a rabid Porsche driver will be in your rearview mirror, honking and flashing. And make no mistake, oh yes, you will move over.

President Barack Obama must act quickly, before his approval ratings sink even lower. For too long we have let Washington bureaucrats come between us and our freeways. They are after all called FREEways. This is not a Republican or Democratic issue. This is an American issue. Surely on this we can agree? Here is the three point legislative reform platform from F.U.O.F.F.:

• Re-brand the left lane as "the passing lane."

This would make it clear what the purpose of this lane really is. This is a relatively easy change to the law that could happen fast. (On a scale of 1 to 10, I'd put the probability of this ever passing into law at a 7.)

• Abolish the speed limit on major highways, effectively turning them into autobahns.

This is what a country that cares about driving and personal freedom does. The Germans got it right. Given the generally conservative nature of U.S. drivers and regulators, the probability of this passing gets a 3.

• Issue a $100,000 fine and a sentence of six months in jail, sharing a cell with an axe murderer for people driving below 85 mph in the passing lane.

Laws should put in place strong carrots and sticks. This is a big stick, to solve a big problem. That said, the probability of it passing is a 2.

It is time to get our federal and state legislators to wake up and smell the rubber. We are supposed to be the land of the free. So can we get real FREE-ways? Please.

By Christopher Lochhead
Special to CBSNews.com

CBS News study: Most don't want voting to be harder, see power at stake
Thanks for reading CBS NEWS.
Create your free account or log in
for more features.
View CBS News In
CBS News App Open
Chrome Safari Continue
Be the first to know
Get browser notifications for breaking news, live events, and exclusive reporting.