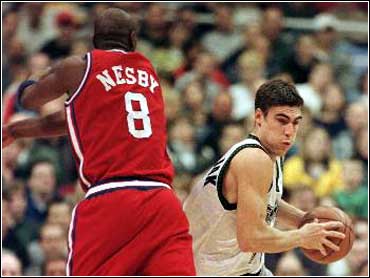 With the Clippers in town, there was no need for Flip Saunders to worry about giving too many minutes to Kevin Garnett.

The Wolves took a comfortable lead early in Thursday night's 116-91 blowout of Los Angeles, meaning that Garnett could sit and watch for half the game while Joe Smith scored 18 points off the bench.

The Timberwolves had their highest scoring quarter of the season with 44 points in the second quarter.

"I was just getting the ball in good positions and trying to finish around the basket as much as I could," said Smith. "I got fouled a few times and finished off those plays as well, so that felt good."

Smith's half-court buzzer-beater gave Minnesota a 19-point halftime advantage, and the Timberwolves opened the second half with a 14-1 run to to lead by as many as 32.

"Joe turned the complexion of the game with his aggressive play," said Saunders. "He's one of our better rebounders and he moved the ball well and contributed to some good team basketball. That one was fun to watch."

Wally Szczerbiak and Garnett added 16 points each and Terrell Brandon had 15 for the Timberwolves, who dished the ball off for 41 assists one shy of the franchise record.

According to some Minnesota players, the passing frenzy is indicative of a new attitude instilled since the team's disappointing home loss to the Nets last Sunday.

"We watched the tape of the New Jersey game and I think we all learned from it," said Garnett. "At least 80 percent of the time that we share the ball, we win."

Maurice Taylor, who was dismayed before the game that he wasn't dealt before the NBA trading deadline, led Los Angeles with 22 points.

Clippers interim head coach Jim Todd, who is no 0-11 since taking over for the fired Chris Ford on February 3, said that the passing of the trading deadline without any changes to his lineup may be good for his team's attitude.

"We've had a lot of injuries, but now, hopefully, without any changes, everyone knows who's going to be here," he said. "We'll play out the string and make the most of it."

It was the 13th consecutive loss for the Clippers, who were playing their seventh road game in the past nine days. Perhaps their worst moment came before the game when center Michael Olowokandi was scratched from the lineup due to a sore left knee suffered in Wednesday's loss at Philadelphia.

Still, Los Angeles took a seven-point lead early on before Minnesota started the second quarter with 26-8 run, increasing its lead from 3 points to 21.

"We had too many things going on before the game," said Todd. "We seem to start well, like we did tonight, but we couldn't sustain it."

Los Angeles' bench was no match for the Wolves reserves, but Tyrone Nesby entered the game and contributed 19 points for the Clippers.

"I tried to do what I could, but we've got a lot of guys that are tired," said Nesby. "This has been a long road trip."

The Wolves' 69 first-half points were a season-high.