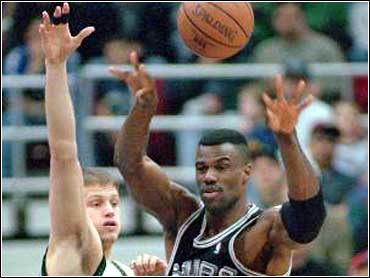 The San Antonio Spurs could have used Tim Duncan down the stretch, when their comeback from a 16-point deficit fell just short.

"It's frustrating to miss games and not be able to help your team out there," Duncan said after sitting out the Spurs' 102-98 loss to Minnesota on Sunday.

"It's frustrating to sit on the side and see things that you could do or would want to do out there and not be able to go."

Duncan missed his second straight game because of a lower abdominal strain.

The Spurs fell behind by 16 in the first half before making a game of it with a smaller lineup that caused mismatches for Minnesota.

"Of course we haven't been together that long," said Kevin Garnett, whose 29 points led the Wolves. "(Coach) Flip Saunders always says we've got to finish teams off a little better than we do. We let teams back in, tend to get a little lackadaisical with the big leads and with more games, with growth, with progress, we'll learn that."

Duncan's absence helped the Wolves hang on as they made nine more baskets than the Spurs and outrebounded them 40-32.

Where was Duncan missed the most?

"Pretty much down the stretch," said David Robinson, who scored 29 points. "And on the boards. We are a lot smaller without Tim and it's real noticeable. If I have to go help, it leaves us small on the boards. At least with Tim in the game, we have one 7-footer on the boards."

"We were already somewhat used to playing without Sean (Elliott). When you have two important pieces out of the lineup like that, you have a lot to overcome," Johnson said.

And they very nearly did.

For a while it looked as though the Wolves would rout the Midwest Division leaders. Garnett had 19 points and Brandon 16 of his 20 in the first half as the Wolves shot 62 percent, limited the Spurs to 11 rebounds and built a 61-51 halftime lead after leading by as many as 16.

But the Spurs got back into it at the free-throw line, making 20 of 29 after halftime compared to Minnesota's 7 of 8. Six of those foul shots came in the final 24 seconds when the Spurs were forced to foul.

The Wolves still led by 11 when the third quarter buzzer sounded. But the officials conferred, put four-tenths of a second back on the clock and sent Terry Porter to the line.

He sank both free throws, cutting the Spurs' deficit to 83-74.

Duncan, who missed a game for the first time in his career Friday night at Chicago, shot baskets and sat in a whirlpool in hopes of returning to the lineup. But he told coach Gregg Popovich an hour before the game that he'd better not risk it, disappointing the crowd of 19,654, the second-biggest at Target Center this season.

"Another day and hopefully he'll feel a little better," Popovich said. "We'll see for Miami how he feels on Tuesday."