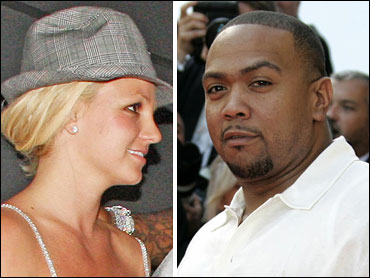 Britney Spears cannot escape bad press. Now, Timbaland -- perhaps the most respected and sought-after producer in the music business -- says the embattled singer ruined any chances of collaboration with him and her former flame Justin Timberlake.

Timbaland told MTV news that Spears could have greatly benefited from a collaboration with Timberlake, who was named MTV's male artist of the year at last weekend's Video Music Awards. It was close to happening, but Spears' ego got in the way, Timbaland said.
"She should, humbly humble herself, "Timbaland told MTV News. "And make a phone call and say I'm sorry. That's it."

"She knows what she's sorry about, too," he added.

Britney needs a hit, Timbaland said, and considering his success over the past year with Timberlake, 50 Cent and Nelly Furtado, he is the producer to do it, but not until Spears is willing to take advice.

In March, Timbaland had said that he and Timberlake would love to work with Spears if she was serious about a comeback. Now, especially after her dismal VMA performance, Timbaland says she needs to prove herself.

"She needs a story," he told MTV. "She has no comeback story. That's the problem. She has to have a team."