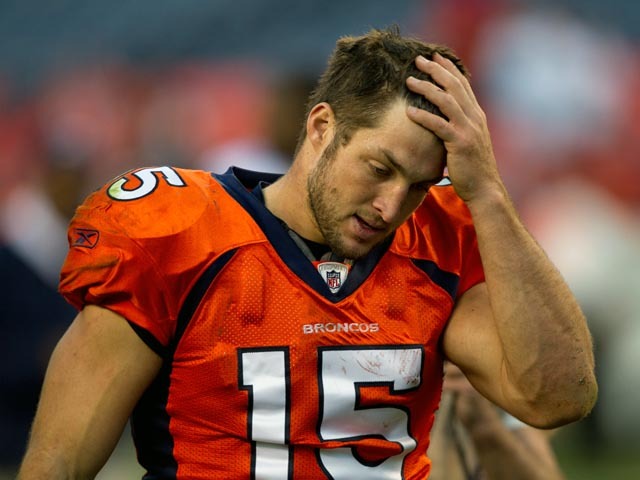 It's not his fault, but Tebow is getting ripped just the same.

It starts with "Tebowing." The former Florida Gator inspired a phenomenon when he dropped to a knee and began praying as his teammates wildly celebrated around him after an improbable overtime victory in Miami last weekend.

That was simply Tebow "Tebowing," a phrase coined by a fan sitting in a bar in New York watching the popular yet polarizing quarterback rally the Denver Broncos.

Jared Kleinstein was mesmerized by Tebow's peaceful demeanor kneeling on the turf amid all the chaos that ensued. He launched a website in which fans could submit photos of themselves "Tebowing," which means getting down on a knee and praying, even if everyone else around you is doing something completely different.

The phenomenon came full circle on Sunday. Of all the ways Detroit linebacker Stephen Tulloch could have celebrated after tackling Tebow for a loss in the first quarter of the game, Tulloch chose to "Tebow."

"I told a friend of mine that I might have a couple sacks this game and if I get him, I'm going to 'Tebow' it," Tulloch told Denver Post columnist Mark Kiszla after the game.

"I want Tebow to know no disrespect to God or anybody, just having a little fun with it."

Tulloch isn't the only one having fun at Tebow's expense. (Detroit tight end Tony Scheffler also pulled a Tebow after catching a touchdown pass.) The Broncos QB has had dismal numbers in his first two starts, and sports journalists are falling over themselves to describe his mediocrity.

"Right here, right now, Tebow is the worst quarterback in the NFL," Mark Kizsla writes. Responding to the oft-repeated claim that Tebow has the "intangibles" to make it in the league, Kizsla writes, "intangibles are awesome, but rarely prove to be as valuable to any quarterback as a discernable talent such as hitting a wide open receiver in the end zone."

With two starts on the season, Tebow has completed 35 of 76 passes for a 46.1-percent completion rate. Broncos coach John Fox said he's sticking with his embattled young signal-caller for at least another week.