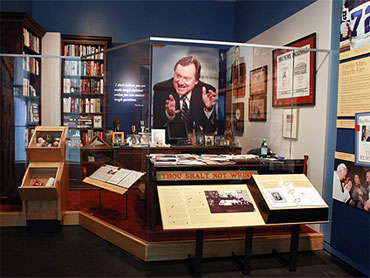 Museum visitors in Washington will get the chance to step into "Meet the Press" moderator Tim Russert's old NBC office, which has been reassembled at the Newseum.

An exhibit opens Friday with the office recreated to look as it did in June 2008 when Russert died of a heart attack at age 58. The journalism museum will keep the office on display through 2010.

Russert was NBC's Washington bureau chief. A wooden sign for his staff reads "Thou Shalt Not Whine."

Newseum chief executive Charles Overby has said the only other journalist who gets such prominent treatment is Edward R. Murrow.