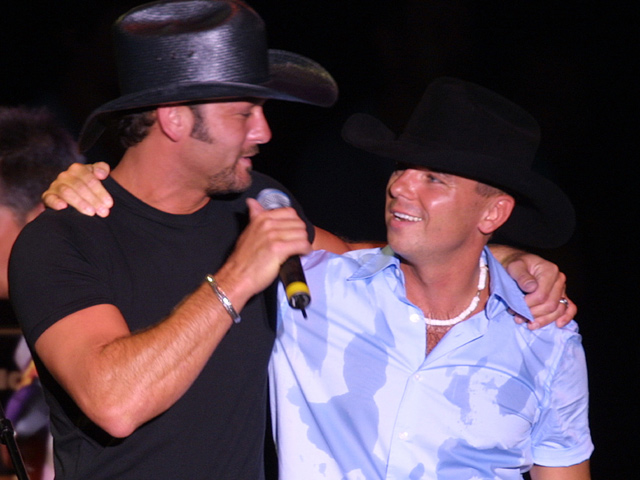 (CBS/AP) Country music stars and old friends Tim McGraw and Kenny Chesney are joining forces, once again, for the "Brothers of the Sun Tour" next summer.

Chesney and McGraw got to know each other living in the same apartment complex 20 years ago. They cemented their friendship, opening for George Strait, and teamed up in 2001 when McGraw invited Chesney on the road at a pivotal moment in his career.

"It's two artists who've known each other for 20 years, who've been friends for 20 years ... at the top of our game to be able to go out and do this together," McGraw said. "To get two artists to agree on anything is pretty spectacular. But to agree to go out together, do a tour together and just have a great time together and play music together is a pretty unique and remarkable thing. And I think that can only happen with guys who are as good of friends as we are."

The tour will kick off June 2 in Tampa, Fla., and wrap Aug. 25 in Foxboro, Mass. Along the way there will be stops in many of the nation's largest cities, including East Rutherford, N.J., where Chesney set a record this summer for paid attendance to a live country show in the New York City area. There's also a stop in Nashville, a place neither artist has played regularly.

"It seemed time," Chesney said. "There was no other reason than that. It just seemed like it was time for us to play at home again. It's a really ironic place for us to play because we played in the shadows of that place for so long, right downtown in all these bars ... for tips. Now all we have to do is go across the river."

Their lives now are something that they both daydreamed about while living at Oakwell Farms Apartments outside Nashville in Stewarts Ferry.

The two have so many stories, though few they're willing to tell publicly.

"Oh, yeah, yeah, yeah. That's all that needs to be said about that," McGraw said as both laughed at the memory. "I remember the electricity being off a lot (and saying), 'Bring some burritos and a fire log. Bring your guitar and we'll sing George Strait's greatest hits.'"