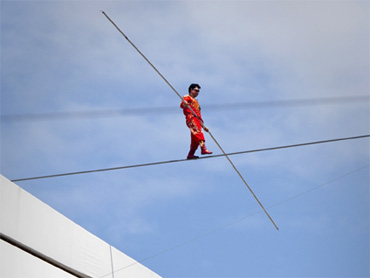 Adili Wuxor, who has been walking about 12 miles a day on the tightrope strung across the stadium, finished his last performance Friday, breaking the record for the longest period of mid-air walking. He walked more than five hours a day for 60 days.

A representative from Guinness World Records presented him with a certificate at a news conference.

"I'm very lucky to have this opportunity to walk in such an iconic structure," Wuxor told The Associated Press. "It's not just a record for myself, but also a record for all Chinese people."

Chinese media have dubbed Wuxor the "prince of tightrope walking." Since April, he has lived in a small cabin adjacent to the tightrope, eating and sleeping there while performing stunts for visitors during the day. He already holds five Guinness World Records for various tightrope-related stunts.

The Bird's Nest was the venue for the opening and closing ceremonies and the track and field events for the 2008 Beijing Olympic Games.

Wuxor, an ethnic Uighur from the far western region of Xinjiang, says he's ready to take on a new challenge in October: to walk on a tightrope from an island off the southern city of Xiamen to the shore.