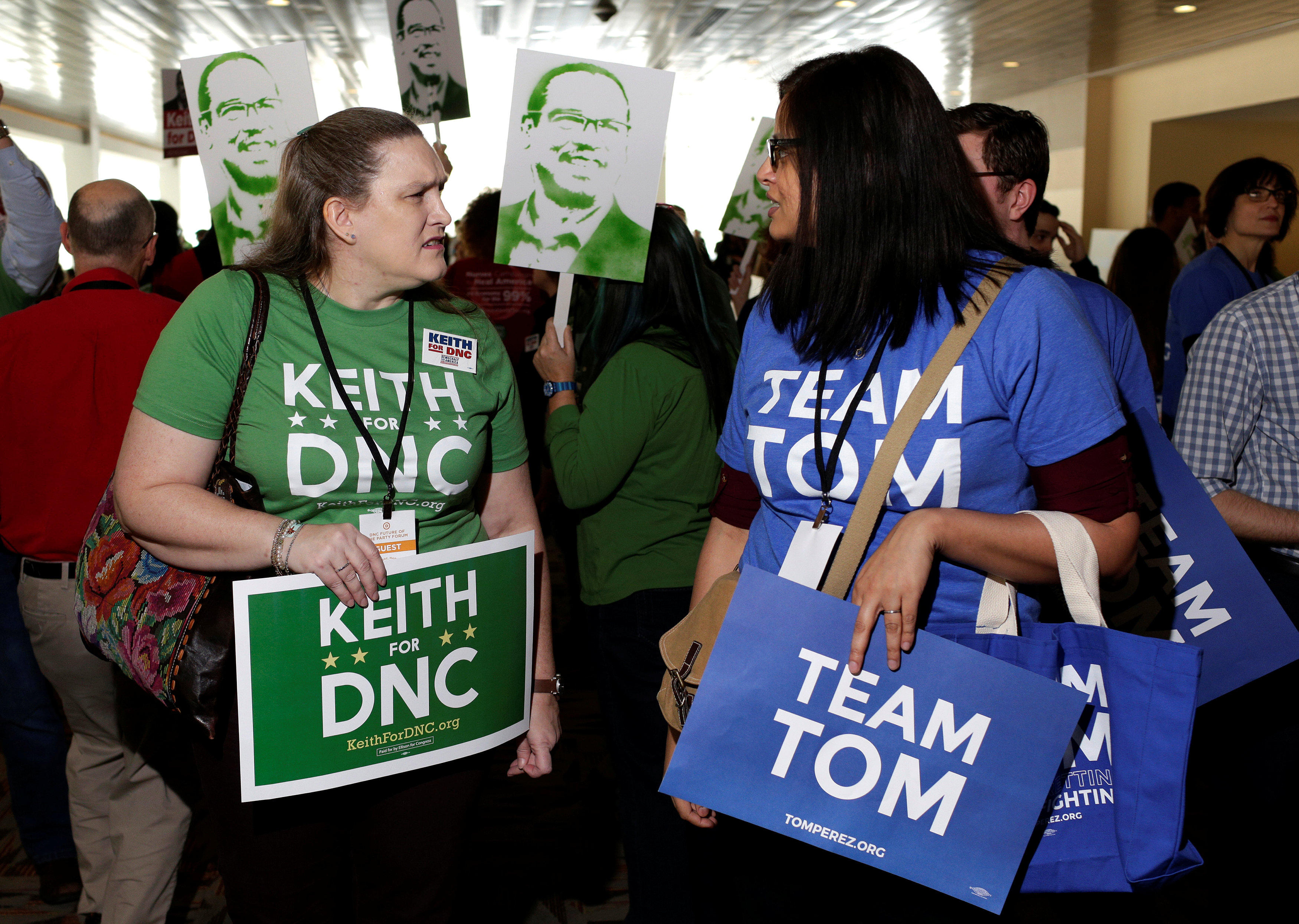 ATLANTA -- Just days before Democratic activists pick a new party chair, the contest to head the Democratic National Committee remains fluid, as national leaders grapple with how to turn an outpouring of liberal protest against President Donald Trump into political gains.

A tight race between front-runners Tom Perez, a former labor secretary, and Rep. Keith Ellison, a Minnesota congressman, marks the first heavily contested battle to run the organization in recent history. The contest comes with Democrats facing a power deficit in Washington and around the country after years of losses in Congress, governor’s mansions and statehouses, while also having no unifying national leader since former President Barack Obama left the White House.

Perez, who was encouraged by Obama administration officials to run for the post, has emerged as the apparent front-runner, with independent Democratic strategists tracking him at about 205 votes. But it’s not yet clear whether Perez or Ellison - or one of six other long-shot candidates - is positioned to capture the required majority of the 447-member national party committee.

The strategists spoke on condition of anonymity because many DNC members they track do not want the vote count discussed publicly.

Ellison, backed by Vermont Sen. Bernie Sanders and his supporters, has the support of about 153 members, the strategists said. Ellison spokesman Brett Morrow blasted the count as “totally inaccurate” and said his camp remains “incredibly confident.”

But neither the Ellison nor Buttigieg campaigns would release their own tracking numbers, and multiple other campaigns said the strategists are accurately reflecting the state of the still-competitive race.

The counts have South Carolina Democratic Party chair Jaime Harrison at 27 votes, a number that could make him a kingmaker who tilts the race to the eventual winner. The counts have Buttigieg and Sally Boynton Brown, executive director of the Idaho party, combining for fewer than 20 votes, with remaining DNC members uncommitted.

Party leaders will vote on the final day of its three-day meeting that begins Thursday in Atlanta, with as many rounds as required for a candidate to secure a majority.

In a forum hosted late Wednesday by CNN, the candidates avoided taking shots at one another, instead blasting Trump, offering general promises to rebuild party infrastructure and pledging to reconnect with voters who have abandoned Democratic candidates.

More important than the nationally televised event is the next two days leading candidates will spend wooing the state party chairs, longtime activists and donors who make up the full party committee.

The race could easily tip to either Perez or Ellison; a third possibility is that the committee ends up in deadlocked with the two current leaders short of a majority. That could open up the door for candidates like Harrison, Buttigieg or Boynton Brown to rally more support in later rounds of voting. There’s also the chance that any of the three trailing hopefuls could drop out and endorse Perez or Ellison.

Some Ellison backers question whether Perez, who has spent a career in government but not electoral politics, is the right man to harness the anti-Trump energy and use it to rebuild the party. Other Democrats, meanwhile, worry whether Ellison, an unapologetically combative liberal, is the right messenger for a Democratic Party that has lost standing across wide swaths of the country.

Last week, New Hampshire Democratic chairman Ray Buckley dropped out of the race, throwing his support to Ellison. According to people with knowledge of the conversations, Buckley had asked his rivals for control over day-to-day operations of the organization, as well as the next presidential convention, in return for his support. The sources spoke on condition of anonymity because they were not authorized to disclose details of any overtures and negotiations.

In a statement announcing Buckley’s backing, Ellison said he’s asked the longtime party official to “lead our effort to provide the support and resources the state parties need in a new and innovative 57-state strategy.”

Buckley has been lobbying the roughly dozen members that were supporting his bid to back Ellison.

Last week, Perez told supporters he was just 44 votes away from winning the race, prompting a swift response from Ellison, who charged his rival with pushing “an unverifiable public whip count” and putting “a finger on the scale.” Ellison has picked up a number of high-profile supporters in the past 10 days, including several state party chairs and the backing of the SEIU, a prominent union.