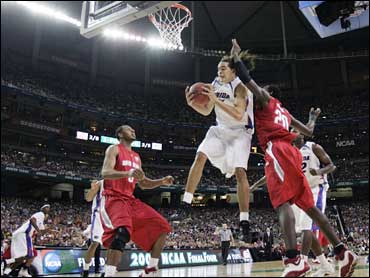 Four overtimes meant more chances for Clarence Gilbert to shoot through his mistakes.

Gilbert kept firing during a 12-for-36 effort that shattered his career high with 43 points, then blocked a last-second shot in the final OT as Missouri beat No. 18 Iowa State 112-109 Saturday.

It was the first four-overtime game in the four-year history of the Big 12. All four of Iowa State's losses the last two seasons have come in overtime, on the road.

Gilbert, who entered the game averaging 16.8 points, surpassed his previous high of 32 points in a double-overtime loss to Iowa in December. He broke Willie Smith's 24-year-old school record for attempts.

He was at his best from 3-point range, going 7-for-18, but took several ill-advised attempts that had coach Quin Snyder and a sellout crowd groaning.

After Sullivan missed a leaner in the lane, Brian Grawer was fouled with 8.2 seconds to go and the Tigers ahead by a point. Grawer made both free throws.

Kareem Rush added 32 points for Missouri. He combined with Gilbert to take 67 of the Tigers' 90 shots.

"I don't mind playing second fiddle," said Rush, the Big 12's leading scorer with a 22-point average. "If a guy can get that many points each night, that's fine with me."

Iowa State's Shane Power and Kantrail Horton fouled out in the fourth overtime, forcing the Cyclones to bring in two players who hadn't seen any action. Coach Larry Eustachy left the court with his head in his hands.

"At one point we thought we had it and then they thought they had it," Eustachy said. "I don't know if I've been in a better one. We each had concocted lineups out there."

Martin Rancik had 24 points, Paul Shirley 22 and Jamaal Tinsley 20 for the Cyclones. Two of Iowa State's three losses this year have come in overtime, and an eight-game conference winning streak ended in an 88-80 overtime loss at Oklahoma State on Monday.

"That was a crazy game, the intensity was way high," said Tinsley, who fouled out in the second overtime. "It hurt a lot to just have to sit there, but all I could do was cheer on my team."

Gilbert was always interesting to watch, with the third overtime a vivid example. He missed three 3-point attempts and made only one of three free throws when he was fouled from long range, but his 3-pointer tied it at 101 with 18.2 seconds to go.

Missouri, which is 8-0 at home, won for the first time in three games against ranked opponents.

Iowa State had the best chance to end it in the second overtime, but Shirley threw up an air ball with about six seconds left and Grawer stole the rebound from Rancik under the basket. Grawer's length-of-court heave hit the net.

Missouri let a six-point lead slip away in the first overtime, missing its last four shots. The Tigers led by two points with plenty of time on the shot clock when Gilbert missed a wild shot in the lane with 1:11 to go.

Gilbert then shot an air ball from the baseline near the basket with 20 seconds left and five seconds to go on the shot clock.

Shirley's layup with 14 seconds to go in the first overtime tied it 82 and Horton tipped Rush's 3-point attempt with two seconds left.

Shirley hit the first of two free throws with 11.8 seconds to go as Iowa State, which led most of the game, forced the first overtime. Gilbert, who had 29 points in regulation, bobbled the ball on the dribble and put up an air ball from 3-point range with about two seconds to go.