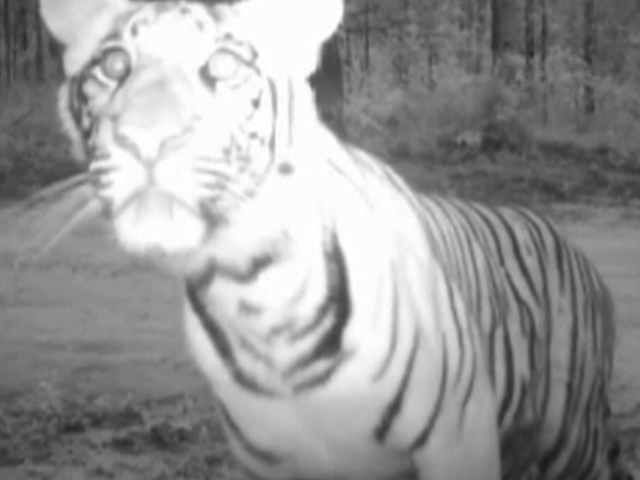 NEW YORK - It may be hard to believe, but tigers have become so endangered that there are now more tigers living in captivity than in the wild. Some of them live in a massive wildlife refuge spread across the border of Burma and Thailand where they are getting the chance to thrive.

CBS News correspondent Seth Doane was granted access to some rare pictures of tigers in the wild. Taken by cameras hidden deep in the jungles of Thailand, the video shows the endangered animals as they've rarely been seen.

The footage was made available only to CBS News by the Wildlife Conservation Society.

"It's the first time that technology has gotten to the stage where we can take videos," Elizabeth Bennett said. Bennett is with the WCS, which runs New York City's Bronx Zoo. The laser-triggered camera traps capture video of the tigers "behaving naturally," she says. "Completely away from humans - there are no humans anywhere near them."

The cameras were set up along Thailand's border with Burma. The images all come from within a special protected zone roughly the size of Rhode Island.

Along with elephants and tigers, poachers also roam. Poaching has contributed to reducing the worldwide tiger population by 97 percent.

"Illegal wildlife trading is like water running downhill," Bennett said. "You block it in one place and it will go somewhere else."

In Thailand, the tiger population appears to be stabilizing, while it continues its steep decline elsewhere.

Bennett credits good enforcement and patrols in the area. The Thai government has trained 190 park rangers who work in 20 separate patrol teams using GPS and tracking devices to try to prevent poaching.

The video shows not just tigers, but a clouded leopard, a jungle pig nursing her babies and other animals thought to have disappeared from this area.

With just 3,200 tigers left in the wild worldwide, the WCS wants to increase poaching patrols. "We've just got to protect them from being poached in the first place," Bennett said. "Time is just not on our side."

The video provides a stunning glimpse of life, and a glimmer of hope for a population under threat.