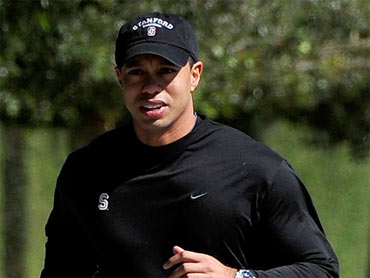 Tiger Woods is to return to therapy after he speaks publicly for the first time about his infidelity, according to a letter from PGA Tour commissioner Tim Finchem that was obtained by The Associated Press.

Finchem's letter to the PGA Tour policy board and other officials explained why Woods chose Friday to make his first public comments, which are to be televised live by all the major networks.

Woods' statement comes during the Match Play Championship, sponsored by Accenture, the first company to drop Woods as a pitchman.

Tiger Woods: Complete Coverage
Will Tiger Woods Cry? Bet on It
Tiger's Statement a "Grand Opportunity"
Can Tiger Learn From Past Celeb Apologies?

"As we understand it, Tiger's therapy called for a week's break at this time during which he has spent a few days with his children and then will make his statement before returning," Finchem said in a letter Thursday. "Accordingly, there was very little flexibility in the date for the announcement."

Woods is to speak at 11 a.m. EST from the clubhouse at TPC Sawgrass, home of the PGA Tour. It's the next major step in image rehabilitation, since his adultery scandal exploded last November, reports CBS News correspondent Mark Strassmann.

The letter shed no light on whether Woods plans to return to the tour anytime soon.

Appearing on CBS' "The Early Show" this morning, Connell Barrett, Editor-at-Large for Golf Magazine, said it was another case of the world revolving around Tiger's rules.

"I was a little bit surprised and disappointed when I heard the rules Tiger was laying down, the ground rules for the press conference," Barrett told anchor Harry Smith. "Because today I'm hoping we see a new chapter written, a new Tiger Woods where he's more humble, he's a little bit more media-friendly, and he's just more open and honest, speaking from the heart. Based on the ground rules for this press conference, that doesn't seem likely."

"Could you say, if you wanted to play couch psychologist, the PGA is continuing to enable him because this whole thing is happening from their very palatial headquarters?" Smith asked.

"That's correct," Barrett said. "I think the PGA Tour obviously wants Tiger back as quickly as possible. The timing I think isn't really that curious because my gut tells me that Tiger's going to want to come back for the Masters. And if he wants to come back to play the Masters, he's going to have to start playing some warm-up events, and that's going to start with this first step saying 'I'm back,' which is what I think we'll hear today."
CBS News has learned 20 to 30 people will be in the room with Woods tomorrow, most of them business partners and friends. What's unclear is whether any family members - including his wife - will be there.

Among those who won't be: sportswriters. The Golf Writers Association is boycotting the event, because Woods will not be answering any questions, just making a statement.

Barrett said the boycott makes total sense. "Golf writers were invited to cover Tiger Woods, yet Tiger said, 'You can't ask me any questions.' It's somewhat of an insult to ask journalists who take their jobs very seriously to cover an event but to act more as stooges and props than actual journalists asking questions."

Also appearing on "The Early Show," Jim Gray of The Golf Channel said during his years covering sports he could only remember two similar events: "The two that would come to mind was Mike Tyson biting off the ear of Evander Holyfield and then facing the music in the press after that and being suspended by the Athletic State Commission of Nevada and coming out and talking to that commission. That was a televised event. I believe all the networks picked it up at the time.

"And then Kobe Bryant appearing with his wife Vanessa after he was in Colorado, the allegations of rape, which [were] dropped and he was exonerated and that went away. Those are the two has come to mind.

"But this is so extraordinary, so out of the ordinary, and it just remains to be seen how this all plays and exactly what he says."

Gray did not expect Woods' wide, Elin, to appear at today's event. "I would imagine if this is Tiger's statement, I don't believe that she would be there. I don't know why he would want to subject her to this. But she may want to show support. These are really questions that can only be answered by Tiger and Elin."

Likewise, Barrett said he would be "shocked" to see Elin today. "I think we'll see Elvis before we'll see Elin at this press conference," he said.

Ernie Els was among players who were upset to learn that Woods had chosen the week of a World Golf Championship for a public appearance that was sure to take attention away from the tournament. "It's selfish," Els told Golfweek magazine.

Finchem told reporters in Marana, Ariz., earlier this week that he didn't think Woods' appearance would undermine Accenture, and that Woods' handlers "have their own reasons for their schedule."

In the letter, he said the tour discussed the timing with Accenture and "they understand that the PGA Tour was not involved in determining the timing of the statement." Finchem also noted that Woods' comments would be over well before television coverage of the third round from Dove Mountain.

The PGA Tour made available its sprawling, Mediterranean-styled clubhouse for the announcement, and is helping set up adjacent ballrooms at the nearby Sawgrass Marriott for media, where they can watch Woods on closed-circuit TV.

Finchem said in the letter that Woods' management asked for the facilities, and "we agreed as we would for any member of the PGA Tour."