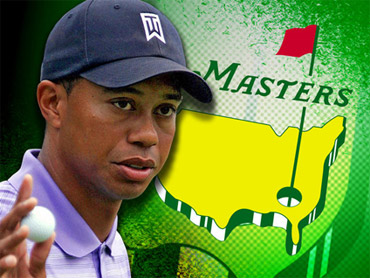 Tiger Woods said Tuesday he will return to golf next month at the Masters, ending a four-month hiatus brought on by a sex scandal that shattered his image as the gold standard in sports.

"The Masters is where I won my first major and I view this tournament with great respect," Woods said in a statement. "After a long and necessary time away from the game, I feel like I'm ready to start my season at Augusta."

Woods has not competed since Nov. 15 when he won the Australian Masters for his 82nd victory worldwide. Twelve days later, he crashed his car into a tree outside his Florida home, setting off shocking revelations that he had been cheating on his wife.

"The major championships have always been a special focus in my career and, as a professional, I think Augusta is where I need to be, even though it's been a while since I last played," Woods said.

"I have undergone almost two months of inpatient therapy and I am continuing my treatment," he said. "Although I'm returning to competition, I still have a lot of work to do in my personal life."

There had been reports he would play the Tavistock Cup exhibition next week in Orlando, followed by the Arnold Palmer Invitational at Bay Hill, where he is the defending champion and a six-time winner.

"When I finally got into a position to think about competitive golf again, it became apparent to me that the Masters would be the earliest I could play," Woods said.

Already the major with the highest TV ratings, this Masters could be the biggest yet. The first two rounds are televised on ESPN, with CBS Sports on the weekend.

"Obviously, the ratings will be off the chart," Heath Slocum said. "It will be interesting to watch - not only the reaction from him, but from the fans, the media, the players. I would venture to say he might be nervous."

Woods twice has come into a major after a long layoff without playing, with mixed results - he missed the cut at Winged Foot for the 2006 U.S. Open after his father died, and he won the 2008 U.S. Open at Torrey Pines while playing on a shattered left knee.

Woods is a four-time Masters champion, although he has not won at Augusta National, his longest drought.

In some respects, the Masters makes sense for golf's No. 1 player to return. It's the most tightly controlled golf event of the year, reports CBS News correspondent Jeff Glor, with limited access to tickets for fans, members of the media accepted by invitation only, and even a special locker room where only past champions are allowed.

Those with season badges risk losing them if they violate policies, or are caught selling them.

"If somebody gets into the tournament and starts heckling, they're gone?" Glor asked golf writer Damon Hack.

"Yea, they are," Hack said. "At Augusta National you can't even run on the golf course - there's no trash - it's almost like Disneyland."

Woods has been the biggest draw at the Masters ever since he became its youngest champion at 21 in 1997, when he broke the tournament scoring record with a 12-shot victory.

That mostly likely won't compare to this year.

Woods' world came crashing down on Nov. 27 when he fled his house in the middle of the night and ran his Cadillac SUV over a fire hydrant and into a tree. About that time, allegations of womanizing began to emerge, and Woods' silence was replaced by rumors of what happened that night and how, as the world's most famous athlete, he could keep so many affairs a secret.

He eventually confessed to infidelity and said Dec. 11 he would take an "indefinite break" from golf. Woods spoke publicly for the first time on Feb. 19 at TPC Sawgrass, where he confessed to cheating on his wife, Elin.

"I have made you question who I am and how I could have done the things I did," Woods said that day.

He was in a Mississippi clinic from Dec. 31 until Feb. 11, then went to an Arizona clinic for a week of family counseling. He returned to practice when he got home to Isleworth, and swing coach Hank Haney joined him last week.

This will be the first time Woods has missed Bay Hill, the only regular PGA Tour event he has always played as a professional.

Meanwhile, the governing body of golf outside the United States said it hoped Woods would play at the British Open in July.

"We're pleased to hear that Tiger is to return to golf. ... Golf needs the world No. 1 to be playing," Royal & Ancient spokesman Malcolm Booth said.

Woods has not yet entered to play at the British Open at St. Andrews, but has until May 27 to send in his entry form. Booth says it's "normal that he hasn't" entered yet.