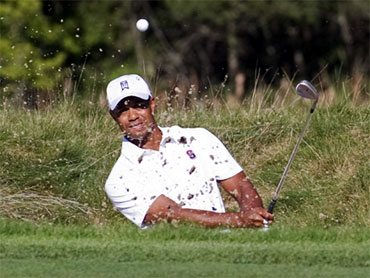 Tiger Woods turned his game around at the right time.

In jeopardy of missing the cut in the Deutsche Bank Championship and missing out on the rest of the FedEx Cup playoffs, Woods didn't hit a bad shot through six holes and played bogey-free for the first time in more than a year for a 6-under 65 that left him in the middle of the pack.

Woods, who started in a tie for 87th, moved up to a tie for 29th and was seven shots behind with 36 holes to play.

"I had to shoot a good one if I was going to move on," Woods said. "And I was able to do that today."

One day after Jason Day opened with a 63 in conditions so calm he might as well have been playing indoors, he found out quickly what he was up against Saturday in tree-shaking wind on the TPC at Boston.

He hit a tee shot down the middle and found it in the right rough.

He aimed his 9-iron 10 yards left of his target and saw it fly over the green.

Day got away with it by chipping in for birdie on his way to a 4-under 67 to share the lead with Brandt Snedeker, the second straight week the 22-year-old Australian has been a 36-hole leader in the FedEx Cup playoffs.

"It was a little tougher out there today," Day said. "It wasn't as fun as yesterday, I'll tell you that much."

Snedeker went from the rain showers of Hurricane Earl to breezy conditions in his second round and had a 7-under 64. The wind got stronger throughout the afternoon for Day, who birdied his last two holes to catch Snedeker.

For all the fretting over weather giving half the field a good break, it turned out to be a push. Of the top 18 on the leaderboard, it was evenly split with players who had to cope with rain and who got the worst of the wind.

"I wasn't liking my odds in the draw when I teed of yesterday," Snedeker said. "That being said, I think it's going to end up working out exactly the same. I think these guys in the afternoon are going to have the tough conditions we had yesterday afternoon."

Day, in the 36-hole lead for the second straight week in these playoffs, and Snedeker were at 12-under 130. They were one shot ahead of FedEx Cup leader Matt Kuchar (65) and Charley Hoffman (67), with Luke Donald (67) another shot behind.

Defending champion Steve Stricker made it through another round without a bogey and was at 9-under 133, while Phil Mickelson started hitting fairways and making putts and was in the group at 8-under 134 that included Ryder Cup hopeful Stewart Cink, Hunter Mahan, Zach Johnson and Andres Romero, who only got into the 100-man field by making a 40-foot birdie putt on the final hole last week.

The top 70 in the FedEx Cup standings advance to the third round next week outside Chicago. Fifteen players were eliminated by missing the cut, including Chad Campbell under bizarre circumstances. He was disqualified Saturday morning when officials realized he had never registered for the tournament, a simple formality.

"Just can't believe you make a mistake like that," Campbell said.

Snedeker didn't make hardly any in beautiful morning conditions, except for a bogey on his opening hole. He responded with a birdie on the par-3 11th, then really took over on the easy stretch of holes to start the front nine, which includes a reachable par 5 and a driveable par 4. Snedeker made four birdies in a five-hole stretch.

"Two or three birdies is realistic to expect," Snedeker said. "But you can't get down on yourself if you don't make birdies."

Padraig Harrington, a European Ryder Cup pick last week, missed the cut and might be eliminated from the playoffs.

Woods hit a 3-wood and a 9-iron on the 12th hole during the opening round in the rain. He reached the 469-yard hole just as wind was starting to blow and had to hit driver and 6-iron. For some players, such as Johnson, it was a 3-wood to the green.

This is the 10th tournament in which Mickelson has had a mathematical chance to replace Woods at No. 1, and he hasn't taken advantage too often. The only other time he was in contention was at Firestone, when he went into the weekend one shot behind and closed with a 78.

Lefty has not finished in the top 10 since the U.S. Open, and he missed the cut last week. But he went home to San Diego to hone his game with swing coach Butch Harmon, worked on a new driver and likes what he sees.

"I got my game dialed in, and so I was pretty excited about this week," Mickelson said. "But again, you don't know until you get out here, and you've got to shoot the numbers. Yesterday I didn't quite post the number I wanted to, but today I was able to do that."

Snedeker is No. 53 in the standings and appears to be on his way to Chicago. The idea is to take the drama out of it, and Snedeker has had enough of that. A year ago, he needed only a bogey on the last hole to get into the final round of the playoffs at the Tour Championship, and wound up four-putting from 12 feet.

"That's what makes the FedEx Cup great," he said. "It has those kind of stories. You put a little bit more extra pressure on yourself than you normally should, and I learned from that last year."