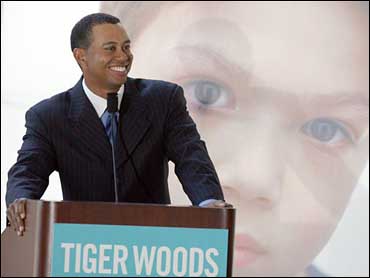 Tiger Woods called it the best day of his career, and he never even hit a shot.

Instead of putting a golf club in his hand, he gripped an oversized pair of scissors and cut the ceremonial ribbon to officially open his $25 million Tiger Woods Learning Center, aimed at helping children find their way.

And it came with a surprise at the end of an hourlong ceremony that featured former President Clinton and Maria Shriver, the wife of California Gov. Arnold Schwarzenegger. City officials thanked Woods for bringing the learning center to his old neighborhood, then unveiled a street sign: Tiger Woods Way.

That will be on the name of the driveway leading to the center, and the official address will be 1 Tiger Woods Way.

Through it all, Woods was beaming as though he had just won the Masters.

"This is by far the greatest thing that has ever happened to me," said Woods, a winner of 57 tournaments worldwide and 10 major championships. "This is bigger than golf. This is bigger than anything I've done on the golf course. Because we will be able to shape lives."

The 35,000-square-foot facility is located next to the H.G. "Dad" Miller Golf Course, where Woods played when he was in high school. Kids who apply by writing letters come to the center after school for interactive programs in science, math and technology.

"I'm impressed Tiger Woods decided to do this when he was 30 instead of when he was 60," Clinton said.

Clinton recalled being elected governor of Arkansas when he was 32, the youngest person elected to that position in 40 years. He referred to himself as a "good governor and a political failure."

"It's hard to have great gifts and bring them to bear in the public eye under enormous pressure when you're young," Clinton said, then turning to Woods.

"And it's a tribute to you ... that somehow you've been able to amass a stunning, unprecedented record and keep holding yourself up to start giving back at this point in your life."

The only sad note to a day of brilliant sunshine was the absence of his father, Earl Woods, who is battling cancer and could not leave his home a short drive away.

Woods nearly broke down when he mentioned the support of his father, just as he did last April when he won the Masters for the fourth time.

"I talked to him last night," Woods said. "He kept telling me how proud he was of what I was able to do, and proud of me for thinking of this. It's hard on all of us."

The Tiger Woods Foundation was created shortly after Woods turned pro, and although his focus immediately turned to children, he did not have a clear vision of what to do. Woods primarily staged junior golf clinics around the country, later assembling selected kids to attend a clinic in Orlando, Fla. He referred to it as a "circus act," breezing in and out of town and leaving kids little more than memories.

That changed after the Sept. 11 terrorist attacks. Woods, stranded in St. Louis where a World Golf Championship was canceled, drove to Florida and said he spent most of that time reflecting on his life and the foundation.

That's when he thought of the idea of a learning center, and it took 3 ½ years from the first meeting with Orange County officials to reach the grand opening.

Woods donated the first $5 million to the project, along with earnings from his Target World Challenge at the end of the season. He was involved in starting a new PGA Tour event, the Deutsche Bank Championship outside Boston, which gives its net proceeds to the Tiger Woods Foundation.

And he relied heavily on 25 founding partners, which range from Target to Nike to Augusta National.

Woods has said he would like to be remembered more for his work with children than the number of majors he ultimately wins, and referred to golf as "merely a vehicle."